See, this is why I love reading your blogs. If I hadn't read this I wouldn't have known to read this. And THAT is what I'm talkin' 'bout.

Thrifty Decor Chick is giving away over $300 in Silhouette merchandise. So, go over there and enter. Wait...no, don't. 'Cause I want to win. Okay, I'll be nice. Go enter. Then when YOU win I can say "I knew her when..." after you become a famous vinyl letterer-er.

Or something like that. Good luck! Giveaway ends Tuesday, June 29th at noon!

Written by Heathahlee at 1:45 AM 2 comments:

Hello? Hello? Is this thing on?

I know y'all sweet people who follow me and read me via email think I've fallen off the face of the earth. Well, I haven't. There are just seasons in our lives when blogging has to be put on the back burner. For the past month, I've been smack dab in the middle of that season. With Shadow's death and mom's hospital stay, I entered into a depressed state. I'm not completely through it, either.

Along with the drama around those two events, I also have been dealing with some health issues. I thought I had nodules on my vocal chords...something a singer dreads with all her being. It wasn't nodules, thank the Lord, but it is acid reflux...bad enough to cause me to be on some heavy duty medicine. I go back in a couple weeks to check on it.

Along with the acid reflux, my wonderful Ear, Nose and Throat doctor, Dr. Lim, found that my thyroid was enlarged and ordered an ultrasound. I have nodes in each side of my thyroid, which means I go tomorrow to have some blood work done to see how my thyroid is functioning. Then I will go back to Dr. Lim to have those labs looked over when I see her about my acid reflux.

Thyroid problems are hereditary, so I knew this was probable sometime in my life. It's just really inconvenient right now.

Now, we just found out this week that Momma will be coming to live with me, at least temporarily. It's a long story, and one I'm not really at liberty to share.

All of this is so very overwhelming. I appreciate your prayers as my family and I work through all of this. I know the Lord has promised that He's here, no matter what I go through. How others who don't know Him go through life...I just can't imagine.

I am still working on tassels, believe it or not. My Etsy shop has been sorely neglected, poor thing. I will be adding more to it in the coming weeks, AND I will be giving a couple of tassels away in the next few weeks with two different blogs. I will let you know when and where when the time comes. 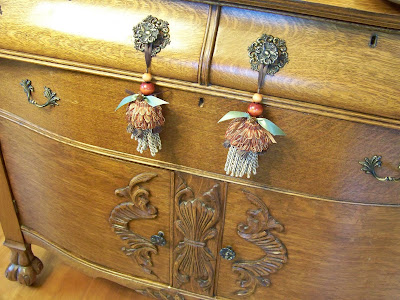 Confession...THESE are not the ones I'm giving away. But you can ask me for some if you'd like to purchase them! They are not loaded on Etsy, so really, if you'd like them, just email me at butterflygenes at yahoo dot com. 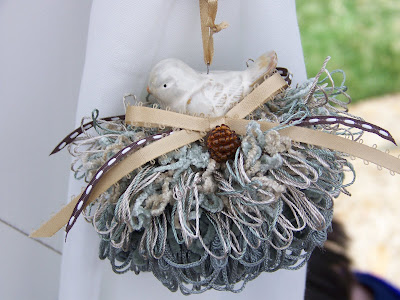 I Miss My Shadow 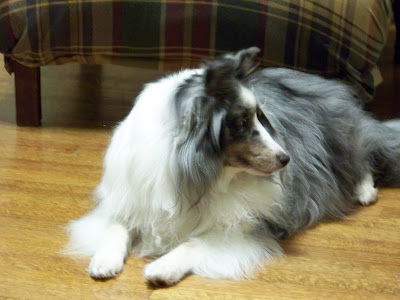 When Sound Man and I got married, we didn't have a pet. In fact, it was almost a year after we were married before we inherited Ike the Cat from my former roommate, Tammy, who was moving to Belize. We decided to get a dog after we moved into our house 14 years ago. After wondering and searching, we decided to get a Sheltie, or Shetland Sheepdog. Sound Man had had a Sheltie when he was young and knew how loving they could be.

We got Windi in 1996, and about a year and a half later, we got Steele. He was a blue merle Sheltie, and was Sound Man's dog, through and through. In a freak incident, we lost Steele while he was in recovery after having been fixed. Kiddo was just a couple months old, and we knew we wanted him to have a dog to grow up with. Rebounding from the pain of losing Steele, we asked our breeder to give us another blue merle as soon as she had a litter with one in it.

Sandra, owner of Critter Camp in Hernando, MS, called just weeks after that to tell us that our favorite of her Shelties, Bethany, had had a litter and there was a blue merle who looked to her like a carbon copy of Steele. We told her we wanted him sight unseen. 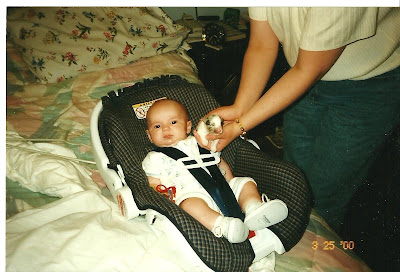 We went down there the day after he was born and weekly after that. Here's Kiddo and Shadow when he was just 5 days old. How tiny! We formally named him Vogue (the kennel name) Shadow of Promise to go on his papers, but just called him Shadow. 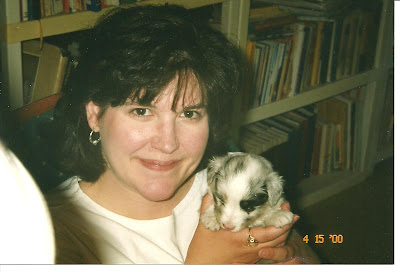 Here we are at 3 weeks. What a precious baby!

Finally the 7 week mark hit, and none too soon. Almost the day after we took Shadow home, the other puppies Sandra had (she had no less than FOUR litters at once. One in each room of the house!) were ALL struck with parvo. She lost a few, and the others were very, very sick. We were so thankful Shadow wasn't affected. 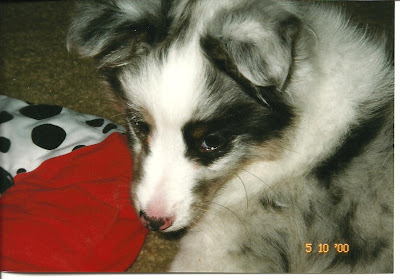 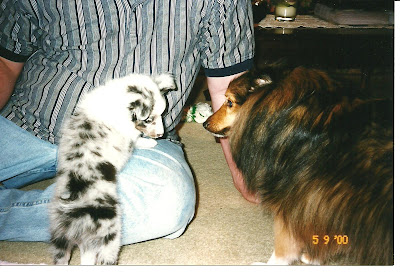 This is Shadow and Windi's first meeting. We weren't sure how she would react, but she tolerated his puppyness quite well, and over the years was his constant companion. 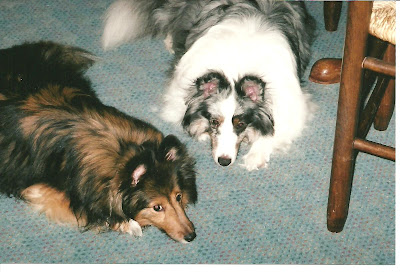 Over the months his personality formed and we knew he was most definitely NOT Steele. Steele had been almost subdued...very different from Shadow. No, he was his own dog, very happy and noisy. He loved to climb on the back of the couch like a dang cat. Crazy thing! 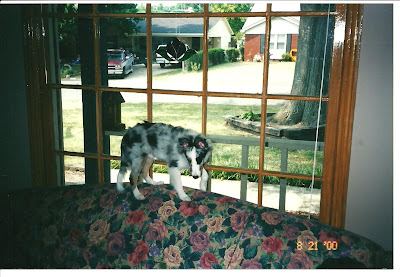 He was also NOT Sound Man's dog. No, Shadow had one person he shadowed...me. He loved his Momma. 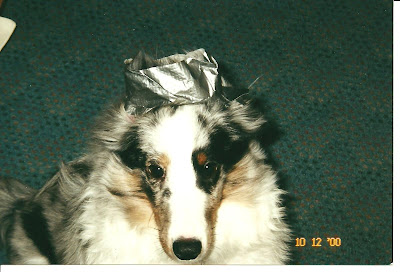 Well, when we taped his ears down to try to get them to tip so we could show him, I don't think he loved me, but he got over it pretty quickly when we gave up on the duct tape and ear glue. Did you know they even made ear glue? Ugh. Poor baby. 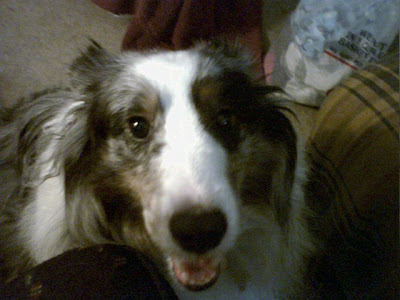 He normally liked to have his picture made, except when we really wanted him to, like for our 2005 Christmas card. Sheesh. 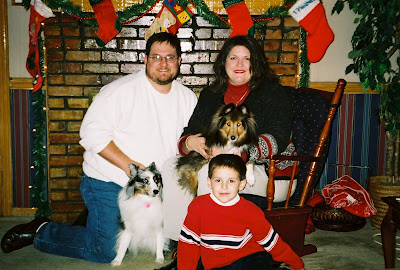 Windi looks so pretty, and Shadow looks like his fixing to break and run!

He was not the favorite dog, neither when it was just Windi and Shadow, and especially not when Jonathan came along. The Golden One most definitely put him in the non-favored status. As he got older, we started calling him the grumpy old man. But we loved him, nonetheless. He was part of our family for ten years. Kiddo had known him since he could remember.

As much as I say he wasn't the favorite, you'd think I wouldn't have been so very sad when we had to say goodbye to him. He had had a cough for several weeks, which we all (including our vet) thought was an allergy thing. I had given him all his meds, and he was no better. But he was still Shadow...still the happy, loud, hyper Sheltie that inhaled his food like he wasn't ever going to be fed again.

Then, one day, he didn't want to eat. The next day, he refused to eat. His breathing became very labored and I took him to the vet. I noticed while waiting for the results of the x-ray that his tongue was blue. I knew that was not a good sign. Thinking she would say that he had pneumonia, put an iv in him and keep him overnight, I was overwhelmingly shocked when she took me to look at the x-ray. Tumors covered his chest cavity. Under his heart, around his lungs. So bad they bent his windpipe. Which is why he was having so much trouble breathing. There was nothing they could do. His quality of life was already greatly compromised. He had gotten so bad that his tongue and the inside of his ears were turning blue.

She was so very kind, allowing me a few minutes alone to call Sound Man to help me make the decision. I just couldn't do it myself. Even after talking to him, I never could say "euthanize."

We decided for me to take him home and spend a few more hours with him. Sound Man came home to take him back up to the vet's office. I just couldn't bear to do it. As Sound Man was holding him, through his labored breathing he gave me one last kiss. The last I saw of him was his beautiful face looking out the window as Sound Man drove off with him back to the vet's.

He brought him back in the box the vet's office gave him and he and Kiddo dug the hole to bury Shadow. I was so very proud of my Kiddo. He cried, of course, but was so very grown up when they called me to come outside. He prayed over the grave and thanked the Lord for Shadow and said that he knew that he was getting to meet Steele. I went back inside the house after the "funeral," crying like a baby.

Jonathan met me at the door, wagging his tail and smiling up at me, as if to say, "It'll be okay, Momma! I'm here!" I don't know what we'd do if we didn't have Jonathan. Windi is still with us, but she is so old she isn't quite as huggable and snuggable as JDog is. And we all three needed hugs and snugs that night.

I still have my moments, like when I think about how quiet it is in the back yard now (Shadow would bark his head off almost the entire time he was outside to go to the bathroom). Or at night, when I think about the funny things he used to do (like how he used to want me to get up in the mornings and come breathe on my face to wake me up).

He had his quirks, but I'm so very glad God gave this little dog to our family. Goodbye, Shadow Pup. We will miss you! 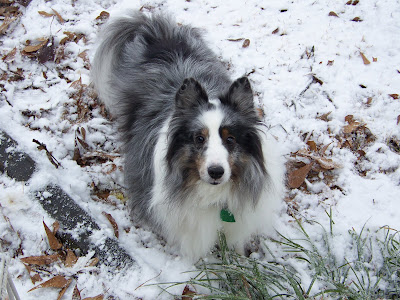