Tornadoes and Tests, Not Necessarily in That Order

I. Am. So. Tired. I haven't even checked email since Tuesday. I'm sure there are people on Facebook and in Blogland who think I've dropped off the face of the earth. Well, not quite. I've felt like I wanted to this week, though.

First, let me say that for the past week and a half, I've been sick with something akin to bronchitis. I NEVER get bronchitis. I always end up with a sinus infection, but nothing ever goes to my lungs. Right now I sound like I've been smoking a pack a day for twenty years. Not fun. I have been coughing so much my stomach and back are sore. I can't laugh because it will throw me into a fit of tuberculosis-sounding coughing. And heaven help my bladder. Just sayin'.

In the middle of all this hacking, we have been in the eye of the storm...literally. In case you don't live in the South, you may not know we have been S.L.A.M.M.E.D. with storms this week. Day after day after day. Today is the first day in at least four that has seen non-tornado weather. You know it's gonna be bad when The Weather Channel sends people to your city. Now, we haven't gotten ANYTHING like Arkansas, central Mississippi, and Alabama got. Sound Man called me this morning and told me about the devastation there. We were worried about Brandi and her family and then I remembered that Myra from The Casabella Project also lived close to where the storms in Alabama had torn through. I checked on Brandi on Facebook and found out that she is not only okay, but helping her church collect items for the tornado victims, so many of whom have lost everything. And I just saw on Facebook where Myra is okay, but will be without power for a week. As much as I'm thankful they're okay, it breaks my heart to know so many aren't.

In the middle of all these storms, our homeschool group has been taking achievement tests. I'm the administrator for the tests, so it was up to me to decide if we postpone our second day because of the threat of severe weather. We had been able to slip our first one in between rounds of tornado sirens. Out of 20 or so families, NO ONE complained about postponing for a day. Not only did we have the threat of MORE bad weather, but many roads in our county were flooded. While it did sort of break our momentum, we were still able to get back at it today, none the worse for wear. The kids are troopers.

I, however, am at my limit. With all this emotional, physical, and mental strain this week, I'm ready to rest for a day or two. Or twenty. I really wish the beach wasn't 8 hours away. Where's Calgon when you need it? ; )

Written by Heathahlee at 4:38 PM 3 comments:

He is risen indeed!

Written by Heathahlee at 6:00 AM No comments:

If you haven't heard this song, please, please, please take just a minute and watch this video. I just don't think I will ever get tired of it. Happy Good Friday, everyone.

Written by Heathahlee at 9:19 AM 4 comments:

No, this isn't a post about nursing. This weekend we sent our son away to my sister's for the weekend, seeing as how it was our anniversary Friday and Sound Man's birthday today (Sunday). All three of us had a great weekend, in our respective places.

My sister told me about a conversation she had with Kiddo and my Nephew. It went something like this:

Kiddo: Can I have something to drink?

Carlyn: Yes, you can have some ice water.

Kiddo: Can't I have some milk? (He thinks the milk at my sister's house is SOOOOO much better because they drink whole milk instead of the "nasty" 2% we have.)

(It gets a little fuzzy here, since I wasn't there and didn't hear it first hand, but Kiddo asked if it was tap water or something like that.)

Carlyn: Yes, it's from the tap.

Kiddo: I wish whole milk came from the tap.

It's called a cow. 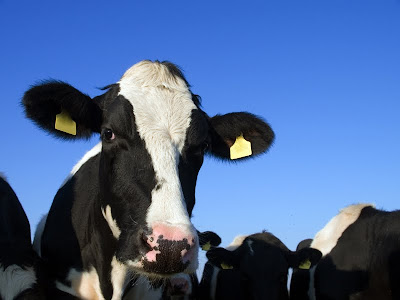 Written by Heathahlee at 8:21 PM 6 comments: