Easter Tassels on the way! 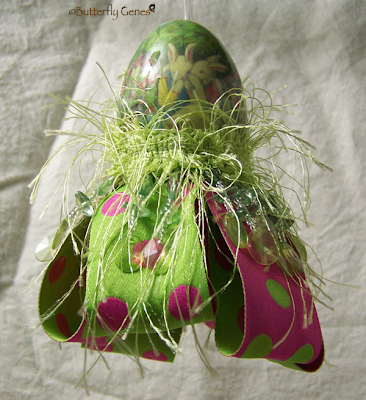 Been loading bunny tassels (I already had some made that I had not not yet loaded on Etsy), and I can't wait to work on some cross tassels (I found some beautifully designed crosses Saturday), and oh, the fringe I discovered this weekend! I can't wait to show you!

Did Joannie Rochette of Canada steal your heart last night like she did mine?

It's not easy. As I sit writing this my mother is in our guest room resting after her chemo treatment yesterday. She is weaker. The loss of the vibrant mother I once had is the most heart wrenching experience I've had. She is so frail...something she has never been until cancer stole her strength from her.

I'm not the only one who is suffering. My brother-in-law's beloved cousin has not been given long to live. I have a friend whose father's battle with cancer is in its last days. I have another friend whose marriage is on the brink of crumbling. Another friend has already experienced that devastation and now faces life alone. My husband has suffered loss recently, as well; nothing I will go into, but he puts on a strong front for me, while I "take up offenses" and want to open up a can of you-know-what on the offender.

During times like these it is so easy to forget the good things. Last night, after Joannie skated, the entire stadium gave her a standing ovation. The Reuters article tells the story:

"The crowd roared when Rochette landed her opening triple Lutz-double toeloop combination, they hollered when she nailed her triple flip, they cheered when she performed her fast paced circular step sequence full of staccato movements and then they leapt to their feet when she held her final pose.

She smiled beautifully into the camera as she stood still for a few seconds with both hands on her hip, and perhaps feeling the embrace of 12,000 pairs of arms wrap around her, she finally crumbled into tears as dozens of bouquets started to rain down on the ice."

She had an entire continent (and maybe more) on her side. Even before I watched last night I thought something similar about the losses we face every day. We cannot make it on our own. Not only do we need Jesus, who offers the Ultimate comfort and support, but we have to have someone or someones pouring life into us. I'm so blessed to say I have many people who do that for me every day, not the least of which is my precious husband.

My friends Kathy, Lisa, Kim, Loretta, Donya, Robbie...all of these women have had such a part of lifting me up when life gets hard. Just yesterday a precious friend of mine handed me the cutest little leopard print bag and said, "Open it!" Inside was a Malco movie gift card that had enough on it for two adult movie tickets, two cokes, and a popcorn for Sound Man and me to split between us. I think she knows how much that meant to me.

I pray that when this season is over...hopefully before that...I am able to give life back to someone else who is facing loss. Father, open my eyes to see those hurting around me. Give me Your words of encouragement so that they know they aren't going through this alone. Forgive me for being so self-centered. You gave Your Son to give us life. I want to live (and share) this life more abundantly.

Written by Heathahlee at 3:28 PM 7 comments:


It gets me EVERY. TIME.

Written by Heathahlee at 9:36 PM 9 comments: 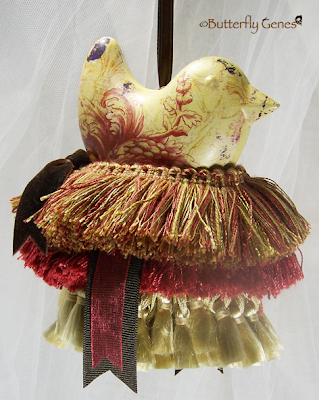 Getting over being sick...

Well, This Was Unexpected...

Five-fifteen in the morning. I am dead-to-the-world asleep. The phone rings. Of course I expect it to be my step-dad telling me he's taken my mom to the hospital or something. No, nothing like that. This is the conversation that ensued:

After which we both get up and laugh our tails off that the Memphis area was totally caught off guard. I mean, usually, they start a week in advance of a slight chance of flurries warning us, which in turn causes every crazy person in the tri-state area to head to MY Wal-mart for bread and milk, which of course means that everything else will be out when I'm doing my normal grocery shopping.

This...this was just crazy. They had mentioned last night that we might get some sleet, but no one made a big deal about it that I knew of. Maybe it was all overshadowed by last night's game. What game, you ask? If you have to ask, I'm not going to be the one to explain it to you.

Anyway, by the time Kiddo and I got up, there was 5 1/2 inches of snow. How do I know? Well, we are very scientific around here: 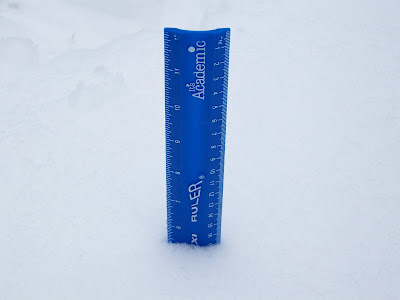 See? No, you probably can't. But trust me. That ruler went all the way to 5 1/2 inches. By the time this picture was taken, this was the only undisturbed spot in the yard. I do have three dogs, not to mention a 10-year-old boy. 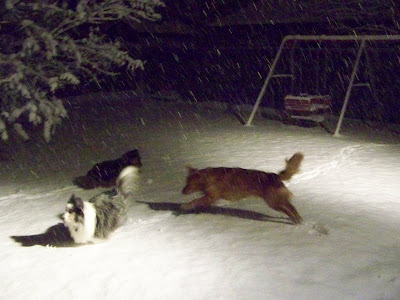 Sound Man took this picture when he let the dogs out about 5:30. I love it because it shows all three dogs with it pouring snow. You can tell how much Jonathan loves it. He cracked me up with all the shenanigans he did while we were out there later. 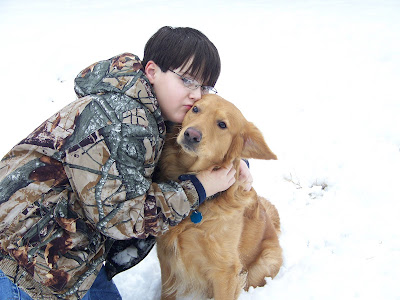 My sweet boy with my big dog. They love each other, they do. And did I mention Jonathan also loves snow? 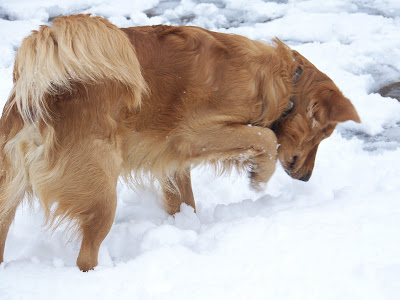 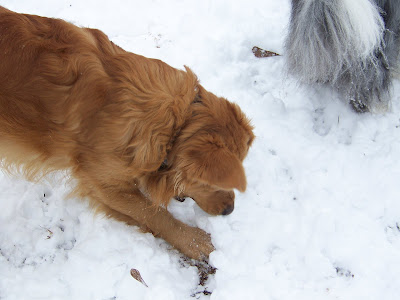 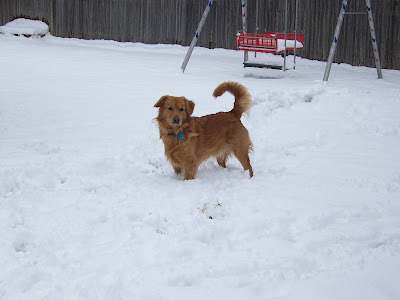 Windi and Shadow, however, tolerate it. Shadow more so than Windi. 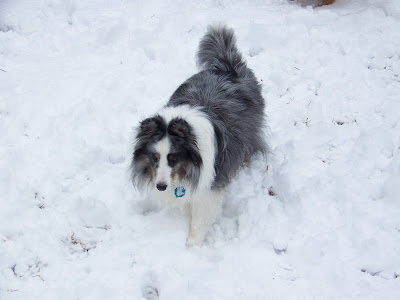 Shadow taking a turn in the white stuff. 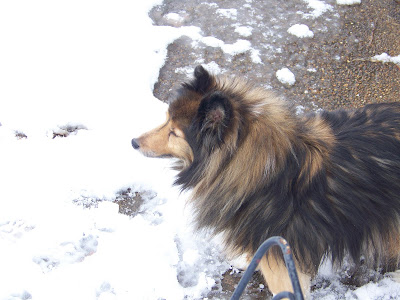 Windi is too prissy (not to mention short) to enjoy being in 5 1/2 inches of snow. This is where she liked to stay. On the patio. Poor baby tried her best to go potty, but she couldn't find a spot in the yard where the snow wasn't half way up to her head. She eventually was able to. Bless her 13-year-old heart.

Have I said that Jonathan LOVES snow? He and Kiddo got into a snowball fight, and this pic shows him trying to get the "ball" out of Kiddo's hands: 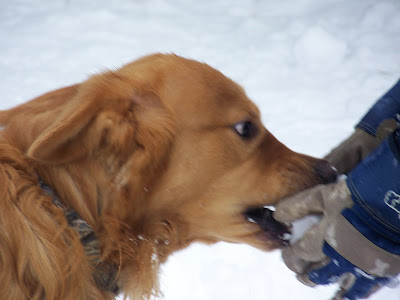 Here's Kiddo and Jonathan playing in the snow. I love it when Jonathan growls like that. He sounds so ferocious. And I suppose he would really be if something were really doing harm to one of us, but here he's just playing.

After we brought the dogs in, Kiddo took the sled out to the front to see if our neighbor's kids wanted to ride. 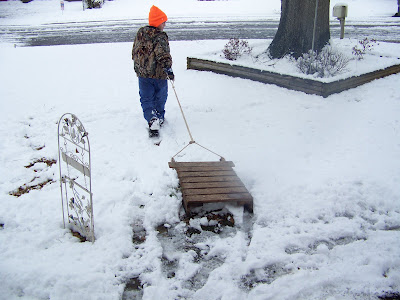 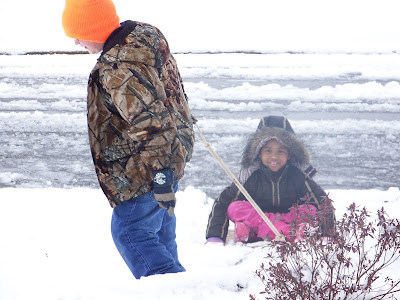 I think that lasted all of three minutes. That sled is heavy! It was built about 25 years ago by an old family friend, and it's still in great condition. Probably because it never gets used!

Well, Kiddo is now inside, warmed up, drinking decaf coffee(yes, coffee...he likes it...go figure) and eating lunch. I am watching what little birds I'm attracting to the yard with the meager fare I put out for them (I was not prepared and only had thistle...sad times). I am taking the day to get caught up on laundry even though I still have much too much of a word that looks a lot like snow but ends with "t" instead of "w" and a headache that WILL. NOT. GO. AWAY.

Maybe if I just spend the day blogging with all of you it will magically go away. Now that's a good idea!

I woke up Friday morning with the WORST sore throat and sinus headache. Normally, I'd jump up and call the doctor and get a sinus cocktail shot the same day. Well, the only problem with that is that Friday happened to be the day that our entire county shut down because a major ice storm was heading our way.

So, I had to wait until Monday. Ugh. Double ugh. But, I finally was able to go get my beloved shot and cough medicine and Z-pack and I'm a happy, although not quite completely healthy, camper.

When I feel like it, I will get to my pics of the beautiful, if disruptive, ice storm. To be so damaging, that stuff is so absolutely gorgeous. I can say that because I didn't have any damage to my trees or house. Other folks around the Memphis area weren't so lucky, having trees fall on their houses, branches fall through roofs, and other very not-beautiful things. I'm sure they wouldn't think the images I have are beautiful, but maybe you will.

Here's an image that makes me smile...and at the time warmed my heart. My big ol' puppy dog knew I wasn't feeling good and allowed me to snuggle with him just a minute...and only a minute. Right after this pic was taken he decided he had enough snuggle time with Momma. Oh, well...I take what I can get. 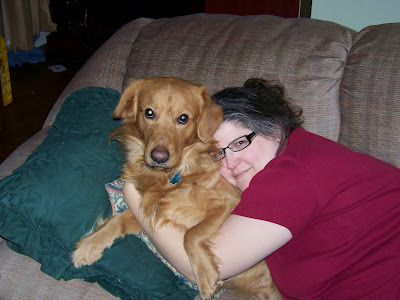 Okay, I have to go take my antibiotic now. *sssnnniiifff*

Written by Heathahlee at 5:53 PM 8 comments: