I'm so boring. I have lost all creativity. You can tell that in the title of this post. BO-RING! But you know what? That's what this post is about, so...I guess I can get away with not being witty.

Exactly two years ago, I posted about some projects I was doing, one of which was this pretty frame with some sand dollars from Gulf Shores, Alabama. 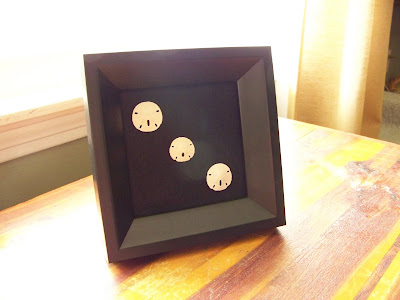 When I first made this, using a clearance frame from Hobby Lobby, I hot glued sand dollars to black felt. It was beautiful. Until it got dusty. Mm-hmm. Did you know that dust sticks to felt like velcro sticks to...well, everything?

So, I took the felt out. I tried to take the sand dollars off, but as gently as I tried, I ended up breaking the back of the first one I took off. I may just cut around the glue and leave it intact. I'd rather have that than broken sand dollars. They're already so fragile.

Anyway, The fact I'm posting about something new two years later is totally coincidental. I just happened to go to Michael's this week where I found some beautiful three-dimensional stickers. I didn't know what I was going to do with them, but I couldn't pass them up. Plus, they were on sale. Bonus!

When I got home, I started thinking about that frame that was just sitting there all by its lonesome. So, using some scrapbooking paper I had picked up while at Michael's, I put the frame back into use. I think it's so pretty. It's sitting on my bird shelf, which is actually my piano.

Here it is sitting in my guest room, which is, at the moment, my Mom's room. But it quickly moved to the piano, where the rest of the bird things are. 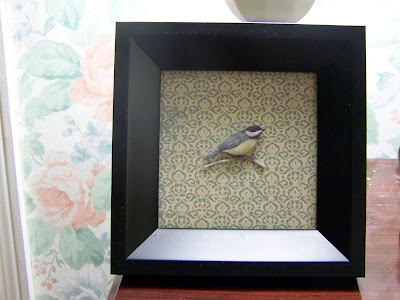 I will post pictures soon of my bird shelf (piano). I can't believe how quickly I've amassed such a sweet collection! I did it sort of without realizing that's what I was going for. I mean, I knew I loved birds, but didn't realize how well everything was going together. 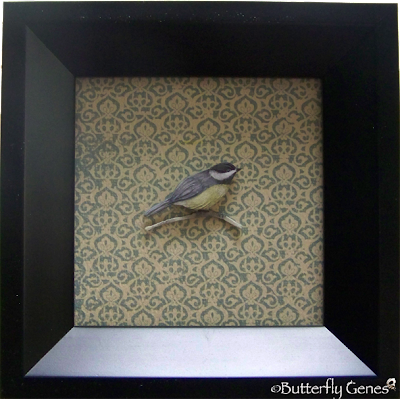 Isn't he pretty? It makes me smile.

Linking up with Everything Etsy's "I made it!" blog party!

Butterfly Genes Wants to Go to the Dogs! 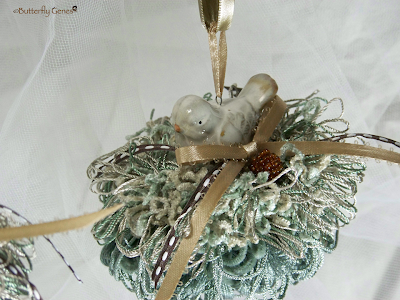 The Cute Little Bird Tassels are my current favorites listed on Etsy, but I also have an Ole Miss Tassel if you're into that. Like, if you're into Ole Miss. Which I'm not particularly. Okay, I'm not wholeheartedly. But I know that, living in North Mississippi just north of Oxford, there are a lot of people who ARE into Ole Miss. So, I indulge them. And they indulge me by making me think they like my stuff. 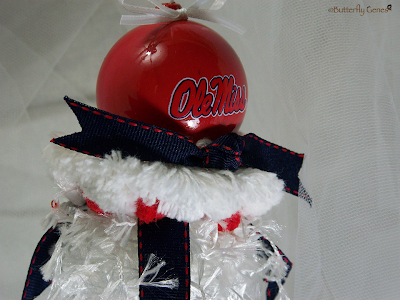 What I need your opinion on is this: how do I market Dog Tassels? Here's what I've got. I made a Golden Retriever Tassel... 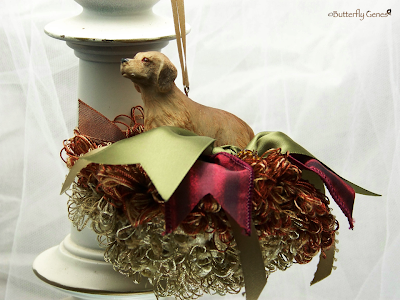 originally to sell on Etsy, but like it so much I'm keeping it. I mean, LOOK at it! 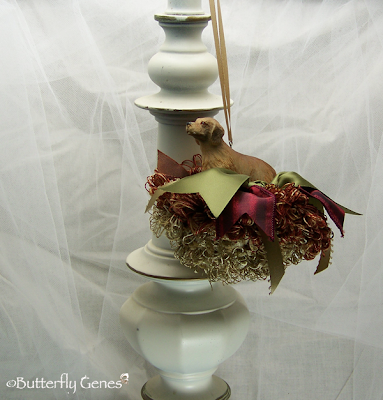 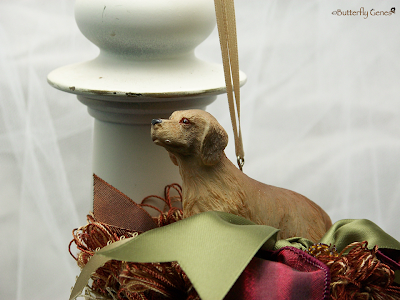 I have about a dozen breeds, including, but not limited to (I've always wanted to say that), Golden Retriever, Basset Hound, Labrador Retriever (black and yellow), Chihuahua, Yorkshire Terrier, Bichon Frise, Papillon, German Shepherd, Poodle, Dalmation, Cocker Spaniel, Shar-pei, Pug, and Dachshund. I'm always on the lookout for more, too. Here's a great shop with as many dog breeds as you can imagine.

If I had had something like this when the Shelties were young, I would have loved it. I have what Sound Man calls our "Sheltie Shrine," where I have pictures of Windi and Shadow, as well as a little pewter figurine and a pretty Sandicast sculpture Kat gave me for my birthday, or Christmas...I can't remember. I've had a few Diet Cokes since then. I even made a cross-stitch of a Sheltie (and returned the favor to Kat and gave her a cross-stitched Corgi).

So anyway, what do you think? How can I let people know these are available?

For the past few weeks, we have not had a lot of rain in our area. That could be said for a lot of the country (except Texas and Oklahoma, of course!). But even though we haven't had a lot of rain, we have had some massive cloud formations. Which has been fine by me.

Ever since I was little I have loved finding shapes in the clouds. I don't do it as often now, but that doesn't mean my love for clouds has diminished. Now I just love looking at clouds for their simple beauty. I can think of little else that is as beautiful as a billowing pink, yellow, and white cloud electrified with lightning strikes within it.

Even though I don't have a picture of that particular occurrence, I do have a few that I thought were pretty spectacular. 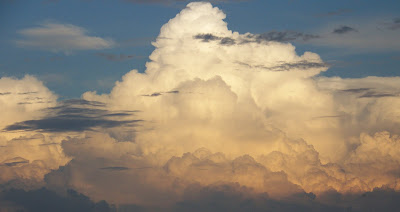 Now THIS is a cloud! This is also the kind I was talking about having lightening in it. This particular one did not (thankfully...since we were at the ball field). 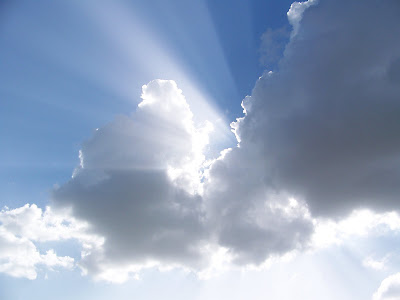 One of my favorite combinations in the world is sun + clouds. Can you see why?

I think sunrise and sunset just wouldn't be the same without clouds enhancing the beauty... 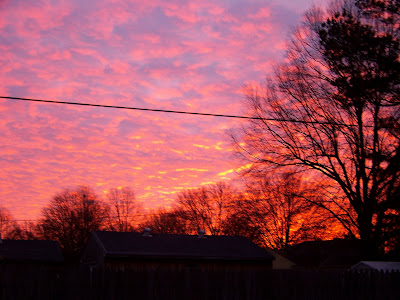 This shot is a little blurry, but it's probably because I was a little blurry...this was sunrise. As sleepy as I was, I knew I'd be sorry if I let those beautiful clouds get away without a picture of them. They look like they're on fire! 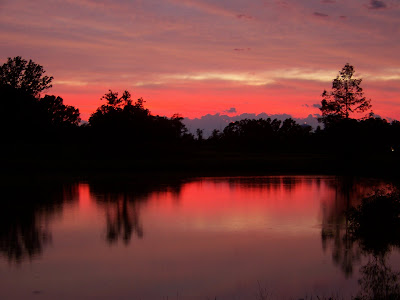 This sunset picture was taken after a huge, HUGE storm had cleared out. As scary as that day had been, just looking at those clouds on the horizon reflected in the pond gave peace to the ones gazing at them.

So...what do you love to look at? Rainbows? Birds? Clearance aisles? I'd love to see your pics!

We had a wonderful Fourth of July...went to church that morning, went home and ate yummy leftovers of some fiesta chicken (recipe coming later this week - not sure that's what we're going to call it, but whatever), took a delicious nap, ate some more yummy dinner that Sound Man grilled (chicken with Cavender's Greek Seasoning - YUMMMMMMY!), then filled up the cooler with some banana pudding (or as we say here in the South, 'nana puddin') and drinks, and headed off to Snowden Grove Park to watch the fireworks.

Sound Man and Kiddo played football while waiting for the sun to set. 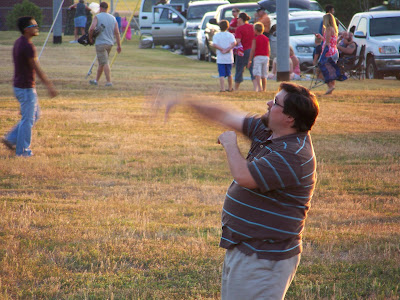 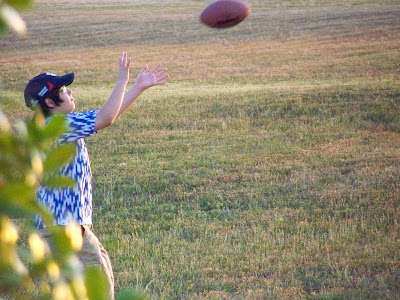 Then joined me in the back of the truck for some 'nana puddin'. 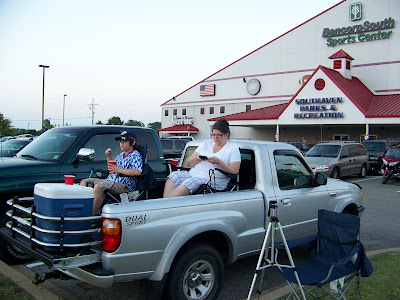 Ugh. Did I really have to post this pic of me? Blech. Anyway, see the tripod set up by the truck? Sound Man was preparing for the show to come. 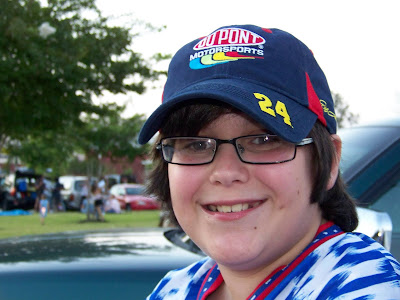 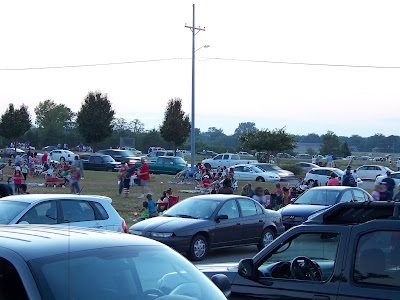 I love the sense of community this celebration creates. Love the community, not the traffic. There must have been 10,000 people or more in and around Snowden by the time the fireworks started. I loved it! Having to go to the non-existent bathroom the whole time, not so much.

Sound Man is a master at taking fireworks pictures with our point-and-shoot camera. This year he got some great shots, as well as some pretty funny ones, too. 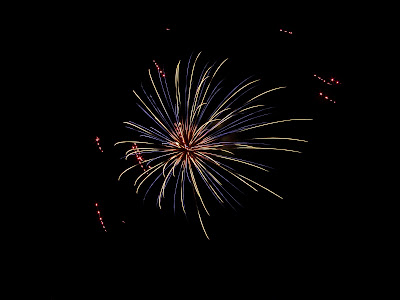 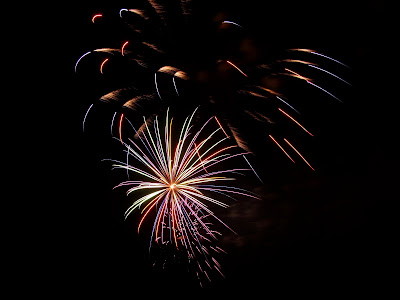 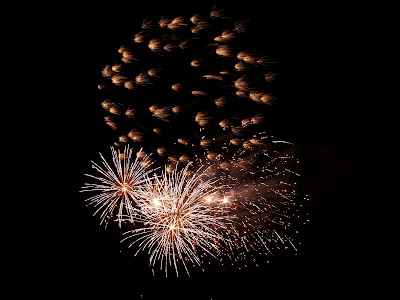 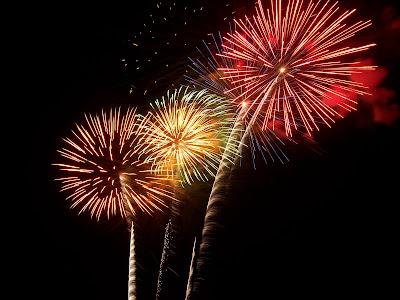 Are these not gorgeous? I love just looking at them! They were exploding right over our heads and it was AWESOME! 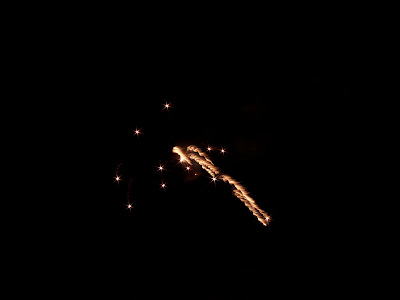 This one we almost deleted when we loaded them off the camera, but Sound Man noticed that if you look closely, you can see the shape of stars in the little pinpoints. Aren't they pretty? 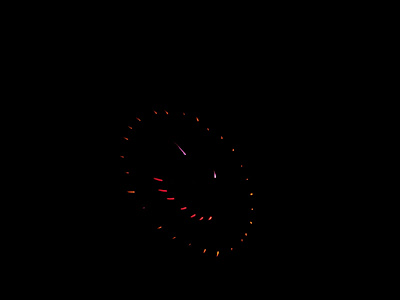 No, this is not Photo-shopped. It's a smiley face! This is something I hadn't seen before this year. I've seen stars and hearts, but no smileys!

Speaking of no smileys, what does this picture remind you of? 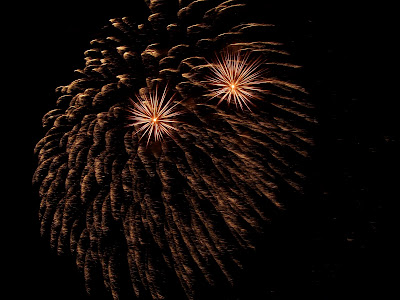 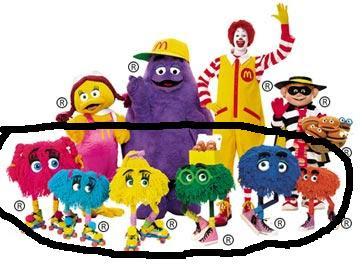 These guys? It's the first thing Sound Man and I said when we saw the picture!

The last picture is not a really good photo of fireworks, but I wanted to show you what was going on when the LOUDEST fireworks I had ever heard were firing off. 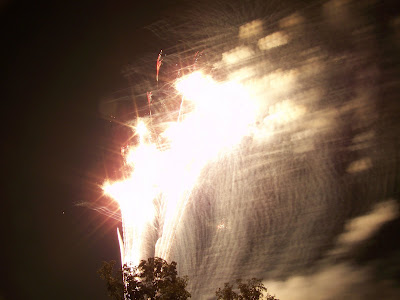 I love to feel fireworks, not just see them...well, feel them I did! It was great!

I hope you had a great weekend, too, and were able to celebrate our country's independence with your loved ones!

Written by Heathahlee at 1:26 PM 4 comments: 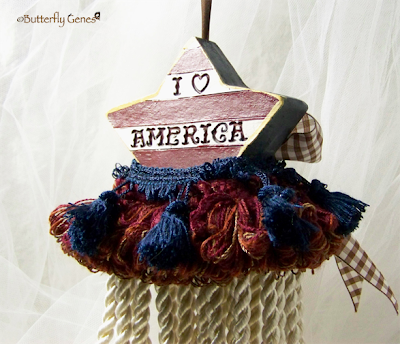 I Love America Tassel on Etsy