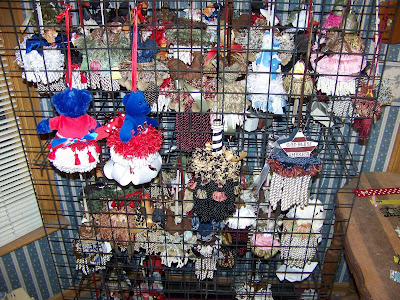 Sound Man and I stayed up working until 2:45 in the morning getting ready for the next day. I said I wanted to have 100 ready, and by midnight I had 98. So, by golly, I had two more to do. And did them I did. (Wait...what?) Anyway, so after getting about 2 hours of sleep, we were up the next morning, headed down to Hernando, MS for the A'Fair. As we were driving down, I kept looking to the west to see the clouds forming. Man, they were ugly. As in, U.G.L.Y. As in, "you ain't got no alibi" ugly. As in, I'm starting to panic. As in, hyperventilating. Well, I hadn't gotten quite that bad, but I was a hair's breadth away from it. I did want to throw up. I did want to turn around and forget the whole thing. But I stuck with it. Partly because my husband kept saying, "Would you STOP looking around at the clouds?" 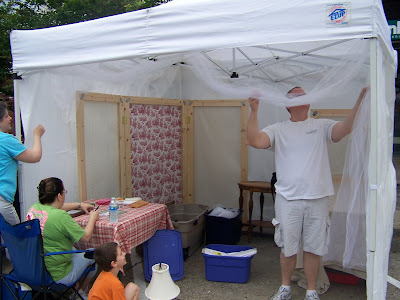 So, we got down to the square (I had a REALLY great spot, by the way) and started to set up. Our friends Jeff and Lisa came and helped ALL DAY (I couldn't believe they were there at 6:30 in the morning!) and while we were setting up, this U.G.L.I.E.R. cloud came up. As in, it looked like the kind that come up before it tornadoes. I'm not kidding. The lady organizing all of us told us that whatever happened, we could run in the courthouse and be safe. But you know what happened? Nothing. The cloud moved over us and it started to clear up. That is, until it started raining. It rained pretty hard for about 15 minutes, scaring me to death. We got everything under the canopy, thinking it was waterproof. It wasn't. My tables started getting water all over them. I started to cry, but Sound Man wouldn't let me. Thankfully, I hadn't gotten my tassels out yet. But after 15 or so minutes, it was over. And that was it. Flood warnings had been posted for the whole area for the whole day, but it rained less than 30 minutes. Can I tell you how good God is?

So, even though my tassels didn't sell, I sent out a lot of business cards (oh, that's a whole other post in and of itself!), and got good responses from the people who did come in and look. All of them said they were "pretty", "cute", "beautiful" but I think they just didn't know what to do with them, even though I had cards and a sign that explained what you DO with a tassel.

But the most important thing I learned was this: God is still faithful, even when we don't understand what He's doing. He kept the rain away, but He didn't bring in the throngs of buyers. Why would he answer one prayer and seemingly ignore the other? I still can't say, but I know that He is faithful. I have learned that over the years, and He keeps reinforcing it. Even during circumstances I think shouldn't be.

Now, having said all of that, I want to show some of my sweet tassels. These are the ones I love the most. Well, some of them. I love most of them. The Ole Miss really took a lot for me to make. Ahem. (I didn't even bother to make any Tennessee tassels...I would have been disowned for sure)

Anyway, back to my pretties. Here are my faves. At least some of them... 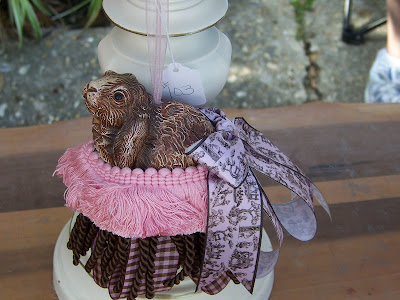 My favorite. Oh, how pretty she is. Pretty pink and brown toile, pretty pink fringe... 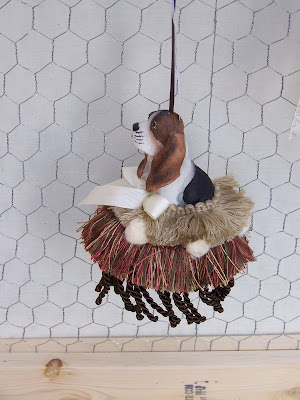 And one of my sweet puppy dogs. 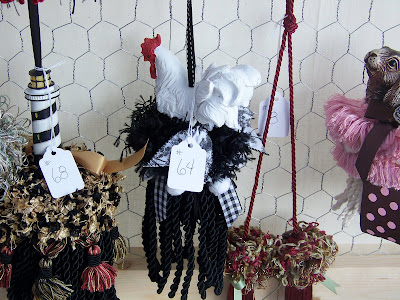 A fun rooster with toile ribbon and black fringe. 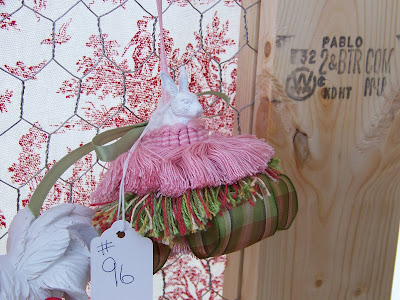 Another favorite bunny. She's tiny...much tinier than this picture shows. 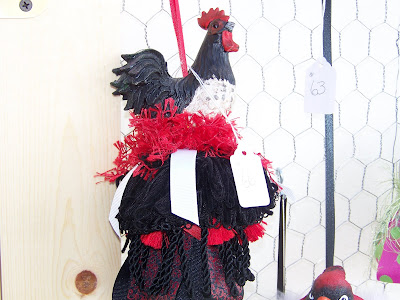 My favorite black rooster with gorgeous ribbon. You can't really see it, but the ribbon underneath is black with beautiful red scrollwork all over. Bee-yoo-tee-fulllll. 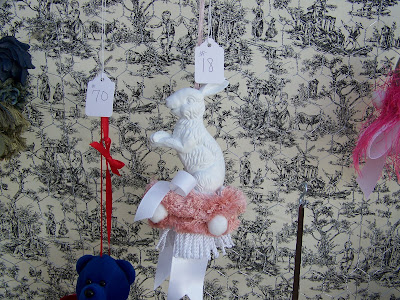 Another bunny. He was my favorite until I found those flop-eared bunnies, poor guy.

And here's this thingie. I'm not even sure what to call it. It's a frame with a toile background with a black and white gingham checked button in the middle. So, what do you call that? It's cute, anyway. I had wanted to make a lot more, but just ran out of time. Lessons for next year. 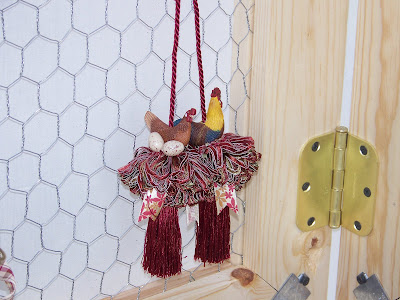 And my favorite of my double tassels. No, I take that back. My second favorite. For some reason we didn't get a picture of my favorite. Anyway, WHY would someone not want to take these cute little chickens home? Cute, cute, CUTE! Oh, well.

Will I participate next year? Probably. Sound Man wants to. I think he was delirious when he said that. You know, lack of sleep. But I picked up an application for next year, nonetheless. I learned many lessons, from having a variety of things to choose from, to pricing, to displaying. Lots to help with next year.

But will it be another year before you see these tassels again? Oh, I'm thinking not....

Written by Heathahlee at 9:32 PM

Awwwww, Heather. I was worried after I stopped by Saturday that you'd be discouraged, but you sound okay. Yes, God is good.

If we're to see your lovlies again, and in the next post, do I smell a giveaway? Hmmmm? I really don't know. If it is, I never win giveaways anyway. And I'll see you Friday :)

Hmmm how much is the oLe Miss and do you have a Mississippi state one? I cannot buy one daughter one college and not the other daughter her college of choice. Hehe!! :)

Your tassels are BEAUTIFUL!!! I can't believe you didn't sell more! I am so glad the rain stayed away after the one downpour!

EIGHT? Oh girl, I'm so sorry. You sound like you have a great attitude about it, but MAN how disappointing! At least you have a huge stock now and can give your wearing fingers a break.

I just got mine and I love it. It came when I was out of town, and now I am out of town again, but will oogle it when I get home. As someone who has done lots of those booths, it can be very disappointing. I have spent three days before only to break even, but you learn and figure out what you can do differently next time. But, I am feeling your pain. ;)

Oh my sweet friend...
You have just gone through what every crafter does at one time or another. I wish it would not have happened on the first show. Please..Please..Please dont give up! They are just beautiful and perfect in every way. One thing about craft fairs...it's a gamble! Some shows I do great and get so pumped up and double my stash only to only make it at the next show. You keep your head up girlfriend and please try again. Spring shows are always slow but there is always the fall ones! Those are so much better. Trust me on this One!
Why dont you do an online show with your blog. Maybe list a few for sale and see. I do have to say Im so proud of you to make 100. I know what that's like and it's no easy task. Your poor dear fingers...awww. Hugs your way and know I have so been there. Susie~

This is just not right! Nope, no way, we are going to sell those tassles girl!

I did the Fall Fastival last year and I felt the same way. I only sold about $100 worth of hard work and labor! I think I had too many things that were already offered! BTW...my school has a thingy in September called "Eagle Day" I'll get you the info and you can put up a booth there! I made a lot of money last year!

Awwwwwww. My instinct is to tell you how sorry I am that things didn't turn out the way you hoped. And I am. Sorry, I mean.

But you seem to have it in perfect perspective.

I'm guessing Sarah Mae has some brilliant idea. Can't wait to hear it!

What you gotta think is you sold 8! The glass is half full! Let me tell you my story! Our church women's group does a fashion show every year and they have a little shopping thingy before the luncheon and show! So two years ago I had just started making jewelry and plunged in and said I would take a booth! I had the times all mixed up and got there late! Didn't have that much stuff and practically sold out before I even got all my stuff out! Honey, I was on cloud nine! "They like me, they really like me!!!" So last year I was much more prepared! More stuff, on time and organized! I didn't sell 1 thing!!!! I traded a purse I had decorated to another vendor for some Beauticontrol makeup! They called me this year and I passed! First of all I just didn't have the time and 2nd I just wasn't willing to take the chance this year! You just never know how those things are going to go sweetie! But now you're ready for a church bazaar or gifts and for next year! God Bless! Lauralu :)

Girl, you did great!

I cannot tell you how many times I started carrying all my too many things into a craft fair only to want to leave it all there for people to steal so I wouldn't have to carry everything back.

It's sometimes hit and miss but there are fairs worth doing. And the people that buy tassels usually already know what they are. If someone came up and asked me what it was for I knew they were not gonna be a customer! I've had places where I've LOST $$. you know, cuz not only did I not sell anything but I paid for the booth and then bought other people's stuff@

You'll find you some uppity shows to do and hit it big!

I think every one who read your blog knows, to a certain degree, how you felt. But you know what I have always told you. That you can do anything you make your mind up to do. So keep on thinking of ways you can get these little jewels in front of the public. I know how hard you worked on them.

You did not e-mail me about Friday night.

Hello.
I think your tassels look absolutely beautiful and I can imagine you were disappointed after all your efforts. I think the advice of Miz Susie and Nester is probably dead on correct, you just never know how it's going to go but don't be discouraged because your next show could be a complete sell out. Anyway I just wanted to comment that I love your tassels and good luck next time *smiles*

You have a positive attitude, trusting in the Lord. And good for you for getting out there and doing that! I've always wanted to try it myself, but haven't. Your tassels are beautiful ... don't stop trying. And if you ever have a Corgi tassel, let me know. ;-)

Wow, your tassels are amazing, I never knew there could be so much variety!