Hope for the Desperate Mom

At the beginning of the new century I was a new mother, and a lucky one at that. My baby started sleeping through the night at 8 weeks, complied with my strict feeding/sleeping/playing schedule, and was (thankfully!) not colicky. At the time, of course, I didn't realize how good I had it. Stories from friends since those days have made me realize how lucky I was.

In the years that have followed, we didn't add to our little family. Not necessarily of our choosing (I've always joked that evidently the Lord knew Kiddo was as much as I could handle!), but we were happy with just Kiddo. I never had the struggles so many young mothers do with more than one young child. Even though Kiddo was a challenge as he got older, I don't remember the feelings of desperation I know so many mothers have.

Until I hit 39. Yep, fast forward ten years from those days of schedules, a clean house, laundry kept up, suppers on the table, etc, etc, and it's a different story.

It may have started before that, but my memory is so foggy of that time in my life, I'm not sure. I was dealing not only with a mother dying of cancer, but also a body that decided to flake out on me. I had no energy, and trying to make it through the day of educating my son, keeping a house clean, and putting supper on the table at night absolutely exhausted me. I fell into depression, only getting things I HAD to accomplish done. My husband made supper more often than I did, and we ate out a LOT which wrecked our budget. Sound Man also did a lot of the house cleaning and laundry, as well. Guilt on top of depression on top of grief for my mother made my days unbearable. I was diagnosed with Hashimoto's Disease (a really scary name for having a thyroid your body thinks is a foreign object and tries to destroy), critically low Vitamin D (normal is 35...mine was 8), and anemia. Not to mention my child never did decide to suddenly become a compliant kid. All of that equals one messed up blob of a woman.

Desperate? Yep...I'd say I was. I wouldn't be lying if I said I still am sometimes...okay, a lot of the time. While my doctors have gotten my thyroid under control, and Momma is happy and whole with Jesus, I still have health issues (and more likely than not, heart and mind issues) that keep me down.

Which is why the words of a book aimed at mothers with young children are underlined with my pen and covered by my highlighter's marks. 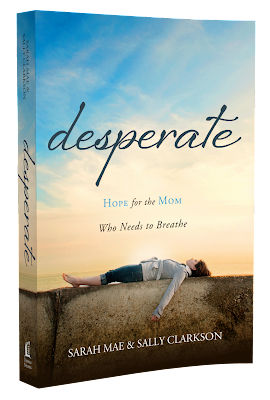 Desperate: Hope for the Mom Who Needs to Breathe is the new book, just released yesterday, by Sarah Mae and Sally Clarkson. I am so excited for Sarah Mae, who has been a bloggy friend of mine since 2008. Meeting her in person at the Relevant Conference (now called Allume) in 2010, not three weeks after I lost my mother, just solidified to me what a precious person she truly is. I haven't met Sally Clarkson yet, but I know many of you have read her books, such as Educating the Whole Hearted Child, Seasons of a Mother's Heart, The Mission of Motherhood, and many more. She is a mentor to so many women just through her writing. I can learn so much from her!

I won't even try to summarize the thoughts I have about this book, because that would take forever, but I will share one or two quotes, just because they stood out to me like a spotlight was shining on them.

On raising my boy:

On depression:
Oh my goodness, there are so many more quotes I could include, but I'd rather you read the book for yourself. Other chapters deal with selfishness (Sarah Mae says she thinks she has a double dose of it...me to, girl, meeee tooooo!), the voices we listen to ("...there is only one voice that matters..." page 133), and, yes, housework. Each chapter begins with notes written by Sarah Mae and Sally to each other, and ends with questions to help you dig deeper into Scripture to see what God's Word says about it. There's something even more special at the very end of each chapter, but I want you to discover that for yourself (have your smartphone handy!).

Does this sound like it might speak to your heart? Please head over to desperatemom.com to order the book. And should you decide to do a small group study with Desperate (which is an AWESOME idea!), some great gifts are included when you purchase multiple copies (this week only!)!

Speaking of gifts, if you've read this far, you deserve some fun stuff! Head to SarahMae.com to enter today's giveaway (massages for a YEAR!), and yesterday's (one year of FREE HOUSE CLEANING! WOOT!)! There are new giveaways every day, and they only last 48 hours, so you better get on over there! The winners will be announced Saturday, and next week, on Monday, January 14, the BIG GIVEAWAY winner will be announced.

What BIG GIVEAWAY is that, you ask? Well, it's a spa getaway for you and a friend with Sarah Mae and Sally Clarkson!

But don't bother entering, 'cause I'm going to win. Just kidding! Get on over there and enter to your heart's content! More giveaways announced each day!

Let me know if you read Desperate, and how you enjoyed it! I can't wait to see what God does with this book!

As a disclaimer, I received a copy of Desperate: Hope for the Mom Who Needs to Breathe in exchange for my honest and objective review. The opinion I've shared here is completely from my heart and was not influenced by anything else but the words on the page.

Written by Heathahlee at 3:45 PM