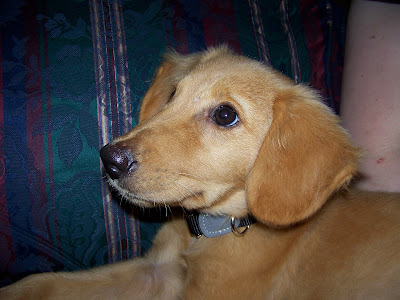 As you know, if you read last Friday's post, we acquired a puppy Thursday night. And you had lots of questions, which I am prepared to answer, for the most part.

First, let me say that he is a he. That would make sense, and we certainly wouldn't want him to be a she. Not that having a she dog is a bad thing, but you get my point. I think.

Whew. That was probably TMI. On to more pleasant topics.

Tina and her husband (Loretta's neighbors) took such good care of them, and I know Loretta and her family did their share, too. They bought food and toys and shampoo and took care of the little guys until permanent homes could be found for them. We are so grateful for their loving care.

When we arrived at Tina's Thursday night we discovered that both pups had been given names. What turned out to be our puppy was called Buddy and his brother, the dominant one of the two, was Skip. Kiddo thought he might keep the name Buddy, but I told him that he could name him anything he wanted to, this was his puppy. Except Loretta's husband said he couldn't be named anything sissy or wussy. Whatever.

I suggested he think of characters in books he liked to read or movies he liked to watch to get inspiration. The first name that came out of his mouth was Jonathan. He's a character in a book series that Kiddo loves to read. He named some others but I kept coming back to Jonathan. He looks like a Jonathan. I know, I'm crazy. But he does. But I thought that the first name would probably not be the last, so we started suggesting more, like Aslan. We decided that was TOO much to live up to. Kiddo then said Goldie, which fell into the "sissy or wussy" category, so that was out. Kiddo finally decided on Jonathan. I loved it. It's a big name for a little puppy, but it just fits. He really does look like his name, just like Windi and Shadow look like their names. Not literally, but you get my point. Work with me, people.

Kiddo asked me on the way home what the name Jonathan meant. We are big into the meaning of names. There are some names we wouldn't even consider when I was pregnant with Kiddo because of what the name meant. I won't mention any because some of you might have kids with those names and who am I to tell you your kid's name means "garbage collector?" Just kidding. We really didn't find any that meant that. At least not that you know of.

Sorry, back to my point. I told him I wasn't sure what it meant but I'd look it up as soon as I had the chance. While Husband and Kiddo were bathing Jonathan I hopped on the 'net (oh, how I love Google!) and found out that Jonathan means "Gift of God" or "God has given." How appropriate. I knew I liked that name!

Oh, my word this dog is cute. And sweet, and even-tempered, and almost house broken. Yes, I said almost. He hadn't tinkled in the floor at all until Saturday, and even then I knew we should have been paying better attention to him. I realized after his accident that he had been standing by the door. Duh. He has had a few more of those and he did have a couple of other accidents that Kiddo had to clean up, gagging the whole time. I would have, too, but I was laughing so hard I couldn't gag. Which, of course, just made my Kiddo mad at me. Thankfully, Jonathan hasn't done that in the floor since Friday morning.

Wet and stinky accidents aside, this dog is just precious. And so stinkin' cute I wish I could kiss him all day. I know, some of you are all like, "Ewwwwww!" But you dog people out there know exactly how I feel. I feel like that big lummox of a dog on Bugs Bunny, "I will keep him and squeeze him and love him and call him George!"

Except we call him Jonathan. 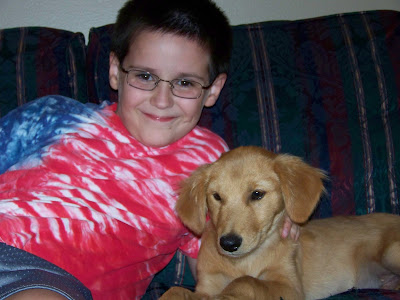 Many more puppy posts to come, I'm sure...
Written by Heathahlee at 1:56 PM

Oh puppy love...he is adorable! And let him kiss away...my son informs me that dogs have the cleaner mouths than humans. Considering the number of times my dog licks me without warning, I am going to believe him:)

Oh yeah we dog lovers know what you mean exactly!! Jonathan is just adorable and son is as happy as can be...you can definately tell!! They sure win your heart over quickly don't they??

The name Jonathan reminded me of the story of David and Jonathan and Jonathan's unyeilding loyalty to his friend. I think that's an entirely appropriate name for a dog. Besides, we already have a Buddy in the family, except his name is Bud, not Buddy.

I knead a spel chicker.

"He" is adorable! Welcome Johnathon to the blog world. Im sure we will see lots more of this cute little guy. Girl you cracked me up on this post.... Thank for the early morning laugh. have fun with your new fur baby!

Oh, what a cute puppy. We have an 11 year old Golden Retriever. I will tell you He is the best dog we have ever had. When he is gone we will more than likely get another one.
Congratulations on your new addition.

Man...he is stinkin' cute...I know your son must be so proud of him. We got our son a lab/ret. mix and she is so sweet...nothing beats a dog!

What a handsome puppy! We have a one year old puppy... well, not really a puppy anymore I suppose... anyhow his name is jack and he is a boxer collie... yeah, odd huh? He was a surprise with a litter of about 8... we have the momma collie... new neighbor without a fence had the boxer, haha! He is the best fur baby. Congrats on yours!! :) ~sharon

Thanks for making me laugh, Heather. Sometimes you are so random, but then...we're related, so I get it (I'm referring to the "name meaning garbage collector" comment). Kiddo looks just like you (keeping his real name anonymous). I do see a little bit of Husband there, but mostly you. And Jonathan is adorable. Small dogs like Shelties are cute and fun, but there's nothing better than playing outside with a big dog. We have a black lab and a German Shepherd...plus 3 small inside dogs (Jack Russell, dachshund, and part chihuahua). Congrats on the spotlight, btw! Gotta run...thanks for the read. Love ya, cuz!

He totally looks like a Jonathan! What a sweet addition to your family.