My Husband Rocks! The Retriever Edition

If you have read my blog for any length of time you know we have two Shetland Sheepdogs, Windi and Shadow. They are pretty old; Windi will be 12 in September and Shadow is 8 1/2. We haven't had a puppy in the house in over 8 years.

My husband has wanted to get Kiddo, who is also 8 1/2, a puppy for a few years now (Shadow was originally supposed to "grow up" with him...duh...dogs grow up a LOT faster than babies!) For years now I have resisted. It wasn't time, he wasn't responsible enough, etc, etc. Plus, we wanted a specific breed: Golden Retriever. Kiddo has loved those dogs since he can remember, and any time we've talked about getting one, he's always assumed it will be a Golden.

My sweet husband had been working on me for several months now about getting Kiddo a pup in December. Not at Christmas, mind you, since that is the worst time to bring a puppy home, but earlier. That gave me a few months to slowly get used to having another dog in the house, house breaking all over again, worrying over whether or not Windi and Shadow will get along with it, blah, blah, blah. That also gave us time to save up for the puppy. Golden Retriever puppies ain't cheap.

So when my friend, Loretta, emailed me a picture of some Golden Retriever mix puppies that her neighbor had found abandoned on the road around from their house, I stalled. I mean, I staaaaallllleeeedddd. I got the email on Friday and wanted to hit "delete" as fast as my fingers could move. But I couldn't. I knew I needed to at least tell my husband about them. But I waited until Tuesday, when the Lord wouldn't let me have a moment's peace any time I opened my inbox. I showed him the message and the picture and he about had apoplexy. If it hadn't been 10:30 P.M. I think he would have gone down there right then. Had I not been there he may HAVE gone down there. You're welcome, Loretta.

Those puppies were all he could think about for the next few days. The lady from the Retriever Rescue came and when she saw them she wanted to take them but Loretta's neighbor told her if she hadn't found homes for them by the weekend she'd give her a call. If we'd had to adopt from them it would have been $250. Free was much better.

So we headed down there last night to take a look at them. Kiddo had absolutely no idea why we were going down. Loretta's kids are friends with him, so it wasn't beyond us to go down there, just not "unplanned" and especially not on their small group night. When we first got there Kiddo went inside to play, which gave my husband and me time to go check out the pups.

Let me just say there was no hope for me now. My husband was hooked from the very first look. Hooked, I tell you! It was just a matter of which one Kiddo would pick out. So we lured him outside and had him play with them. 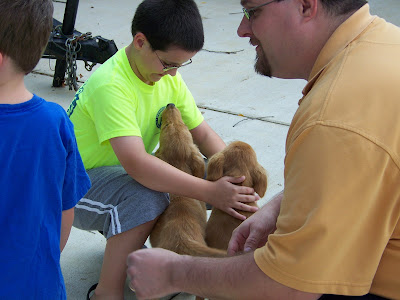 Here's the dialog that ensued:

Husband: "Why don't you pick one out?"

Kiddo: "I like this one, he's smaller and calmer." 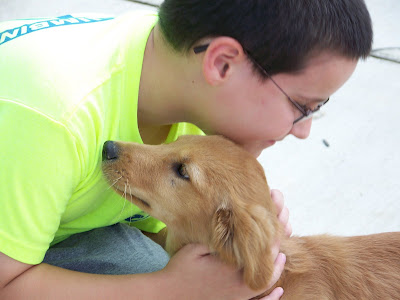 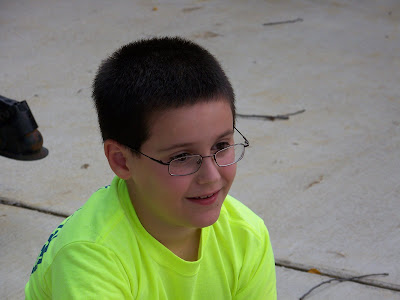 Husband: "Nope, that's the reason we came down here; you can take him home if you want to." 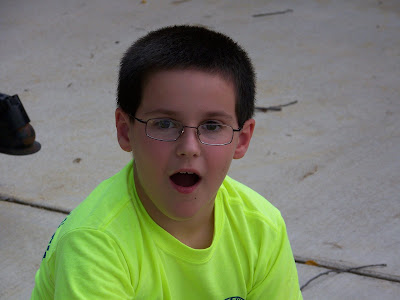 So we are now the new owners of one of the cutest puppies on the planet. OH. MY. WORD. This dog is cute. 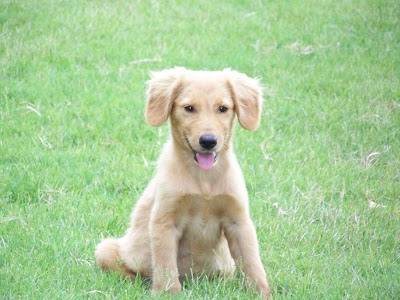 So why is this "My Husband Rocks?" Well, if it hadn't been for his prodding, this sweetheart wouldn't be in our home right now being spoiled absolutely rotten. Not that he was mistreated at Loretta's neighbors...exactly the opposite. But Kiddo is smitten with him, just like My Sweet Husband knew he would be. This is the beginning of a beautiful friendship, all thanks to my Husband, who most definitely rocks. 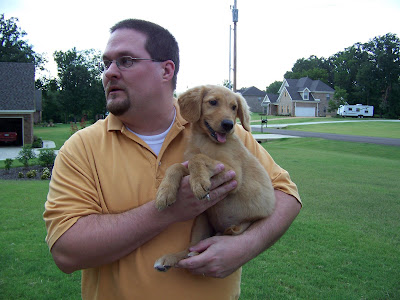 Thanks, Katy Lin, once again for bringing about this wonderful weekly post. You know, you rock, too!

Written by Heathahlee at 8:33 AM

Must. Look. Away. From. THE CUTEST PUPPY EVER! I have been tossing around the idea of getting a second dog and this post didn't help the cause! The look of joy on your son's face is priceless. Enjoy your new family member!

Awwww man! There's too much cuteness in this post. The man. The boy. The puppy.

That is one seriously adorable puppy! I can't tell my hubby about this. He'll be all, "Heathahlee let her hubby get a puppy" or "Heathahlee's son gets to have a puppy."

That look on your son's face is perfect! I love that you caught it on camera!

How adorable! I love that you got the picture of his face when he found out he could take it home.

Have you picked out a name?

PS~ my kids would have puppy-envy bigtime!

Ohhhhh, He's so cute!!!! I miss him already. His brother looks forward to seeing him tonight. Give him a big kiss from me!!!!!

So cute! I looove Goldens, we have 2! They are the most loyal and loving dogs!

Did you hear me squeal when I read this post? They are ADORABLE! And the puppies are cute too.

Kiddo looks so sweet and his expression is PRICELESS! You knew you were going to blog this, so you were prepared with the camera, right?

Our "puppy" is an 11 yr old yellow lab named Sierra. I would love to get another dog, but hubby says no. Maybe I should let your man talk to my man so I can get me another dog....

So, is it a boy or a girl? And does said puppy have a name? And has he/she wet your carpet yet?

He. Is. Absolutely. Adorable!!! What do your other two older dogs think of him?? I know hubby and your son are in heaven....they got a pup!!!

I have two words for you:

Have fun with the puppy!

What a sweet daddy to get your son a wonderful doggie:)

I can't believe you did it!!! What is his name?

I can't wait to see him!

oh.my.word!!! cute does not even go far enough to describe this! it's all so sweet and precious! i love the look on your son's face when he found out! :)