This week, since I haven't blathered on and on since last Monday about how wonderful my husband is, I figured I'd better get a My Husband Rocks! post up or my husband will think I don't love him anymore.

We've had a rough week this week. I don't know why...we've just argued more than normal this week. And our arguments are never over big stuff. Just the little petty stuff that gets annoying in life.

But even when we're argu...uh, discussing things, my husband never brings up stuff from the past. He never drags stuff into the discussion that is not pertinent to the matter at hand. So many other couples let arguments get out of hand becuase they start arguing about stuff that happened 6 months ago.

I'm so thankful for my husband. Not only does he fight fair, he also gave all three of my dogs a bath last night. Think this isn't a feat? Yeah, um, we have TWO Shetland Sheepdogs. Have you SEEN how furry they are? And it's not just their top coat. They have an undercoat that you just can't get through unless you brush them every day, which I don't. 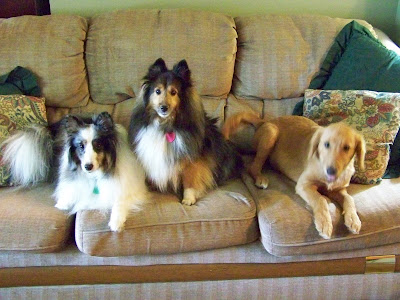 I love this picture. It's a VERY rare moment captured. Not only because Jonathan is rarely this still (you can see the picture of him is blurry because he would NOT be still while I was taking his picture), but also because Windi and Shadow NEVER let Jonathan get this close to them. Sigh...poor baby. He doesn't act like it bothers him, though.

Okay, I digressed a little. Shocker, I know. My point is, my man ROCKS because he gave each hairy, wiggly, nervous pooch a bath in one night. Of course, I did "groom" the Shelties (meaning I attempted to brush them...I did an okay job), but he had the back-breaking task of bathing them all.

Side note here...my Kiddo rocks, too, since he cleaned ALL their kennels by himself. You go, boy!

Thank you, Sweetheart, for fighting fair, and for making our stinky dogs smell sweet again. I love you!

Written by Heathahlee at 9:58 AM

awesome! the doggy baths are one of my least favorite chores - truly sacrificial love there :)

AWESOME...getting all the dogs done in one night!! Your husband DOES rock!!!!

The first thought when I saw the picture of the dogs, "Which one of these is not like the other..." And you must think that thought with the Sesame Street tune going through your mind.

If he's in a really rockin' mood, he can come give Rupert and Dixie a bath ;)

Oh, and one more thing...Windi has a very matriarichal (sp? word?) look and pose in that picture. Yep, she rules!

That is awesome! By the way, your dogs look so soft and fluffy! Wanna pet, wanna pet.... :)

Look how big Jonathan is getting! If he is anything like Jake, if he is still, then he is in trouble. Actually, that is a lot like Henry, too.

When we bath dogs, we ALL get wet whether we want to or not. So, hats off to him for doing it alone. Not so sure Scott would attempt that one by himself.

My hubby wouldn't even think about bathing all 3 of our mini-aussies (all with undercoats, so I feel for ya). That's an amazing feat!

You have an award from me waiting for you at my blog! :)

SO sweet! And NO - I don't think you're a stalker. :) LOVE your comments. XOXOX

I have to agree that is one amazing feat. I definitely wouldn't want to do it.LOL They are cuties though.

That it so sweet.Fighting fair and then I guess your making up is much easier and sweeter!?!

I'm not sure where the original paperback pumpkins came from. I first saw them on Kara and Kijsa's website.