What to make on a blustery day

Last Monday was yucky...it was cold and yucky. Can I say again it was yucky? We were supposed to get an ice storm after having a high temperature at midnight of 60. The temperature plummeted from there and by about 4 p.m. it was about 28. Thankfully, no ice materialized for us, but the afternoon was still a yucky day.

So, what's a Mom and Kiddo to do on a yucky, blustery, frigid day? I have to preface the rest of what I'm going to say by this...Monday was my planned grocery day. We get paid twice a month, and I go to the store each payday. It's not my fault that this payday just happened to be the day after all the weather men in Memphis scared the living daylights out of the entire tri-state area. Who then proceeded to get to the store to stock up on a month's worth of food. Even though it's going to be back in the 50's by Wednesday. People from up north just laugh and laugh at us. We are truly insane people when it comes to snow. I've lived here my entire life and realize we are insane. I try to embrace it, but sometimes it just gets on my nerves. Particularly when all of said scared people end up at my Wal-mart.

Okay, that was jut the preface. On to the real post. The fun part. So, as I'm preparing my list, realizing that it's gonna get butt-stinkin' cold, and realizing that I'm going to be exhausted from dealing with the crazies, and realizing that I'm going to be trying not to worry over my huge oak tree's limbs that overhang my house, I wonder what would make the day all better. The light bulb lit over my head, just like in the cartoons, and I had the perfect idea...homemade hot chocolate! I haven't made this recipe in several years, but it just hit me Sunday night as I was preparing my list that I NEEDED to make it. So, after dragging in the groceries and sitting in the corner rocking back and forth sucking my thumb for just a minute (just kidding....I wasn't in the corner) to get over the trauma I had just experienced, Kiddo and I headed into the kitchen to stir up a big ol' batch of hot chocolate.

And you just heard "big ol' batch" and thought, "Yeah, this recipe probably makes about 4 cups...not worth the effort." But you'd be wrong. This recipe makes a bazillion cups and is weeeeellllll worth the little effort involved. Seriously, I hardly ever made it because I didn't have a mixing bowl big enough. I have since then acquired some mixing bowls which includes one that has a capacity of 24 cups. That's a gallon and a half. And it was just big enough. You will have enough for your family and plenty to spread the love with.

Mix it all in a very big mixing bowl. See how big mine is? 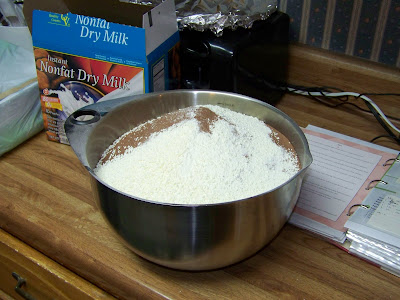 That's 24 cups, people. Anyhow, Kiddo and I started out with a whisk to start the process, but then I went to a wooden spoon to dig deep into the bottom. Here's Kiddo hard at work: 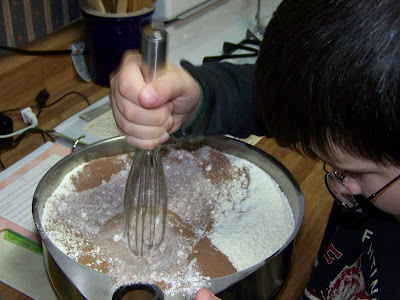 Then, boil you some water, get out your beautiful mug you got on clearance at Hobby Lobby for $.80, wish you had gotten more than one, and put about 1/4 of the mug full of the hot chocolate mix (more or less depending on your taste). Pour in the boiling (or just simmering, you decide how hot you want it) water and stir. And this is what you come up with: 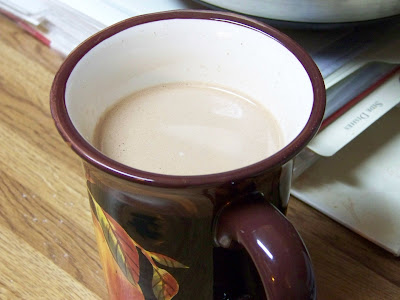 Well, actually I came up with a little more than that, but I was really cold, so I had to take a drink just to take the chill off. And Kiddo reminded me we had some mini-marshmallows so we plopped them in for an added treat. 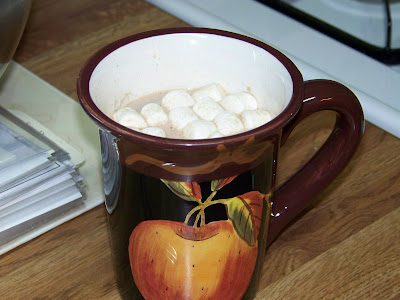 Can I tell you that it was (and has been every mug since then) soooooooo good! I might just have to go make me some right now. I wish you were all here with me to share it with!

Hey, I make this recipe and it so SOOOOO good!! I'll have to make me a big ol batch soon. Makes me wants some looking at your pictures. Yummy... Ok, this is going on my shopping list. Thanks for the reminder!-- Brandi

I LOVe making my own hot chocolate, it saves so much $$!!! I am going to give your recipe a try for sure! :)

Do you realize you said "butt-stinkin'"? I love you anyway...

Oh YUMMY...that looks really good and I wish I was there to share it with you! My mom and I went to Wal-Mart last night to get all our Christmas meal groceries and I have to admit it was not as bad as imagined. They had all of the cashiers open and we made it out just fine.

how fun! that looks delicious. that's neat that you guys made that together! i always loved cooking in the kitchen with my mom

Yummy! I have never made hot chocolate before. I need to!

Yummo! Looks so good :)
I hope you don't mind me popping in here - I found your blog through a nesting place i think it was. Anyway, it's lovely here!
God bless,
Lusi from Sydney Australia