I am such a dork. I know it. I've promised all these wonderful posts about our trip to Nashville, but haven't followed through. Yeah, well, life happens and school happens and helping-your-friend-decorate-a-cake happens. So, here's my apology for not posting about the beautiful home Kat and I visited last Friday. You are so gonna love it when I do actually post about it. Well, I don't know. You may not, but I'm gonna love posting about it.

But that's for another day. Today is the day before Valentine's day. I'm sure you have noticed that. But have you done anything about it? Me neither. Well, Kristen at We are THAT Family HAS done something about it. She started the S.W.A.K. Carnival. You may have seen my button on the sidebar. And though I have not followed through with laying one on my husband every day since the first of February (having a virus/sinus infection/whatever does not really lend itself to kissing), AND I'm really late linking up, I do want to participate in the story-telling. Since today is Friday, I'll piggyback My Husband Rocks! with my story.

Sound Man and I met when I was a Sophomore in college and he was a Junior in high school. My roommate was her church's youth drama group's leader, and they had practice one weekend when I was visiting her. I went with her, thinking it would be fun to hang out with her group. There were two guys in the group. Sound Man was one of them, and I kept watching him, thinking to myself, "Man, he sure is cute!" But he was in high school and I was in college. So, I forgot about him for a while.

Fast forward a few months. I was about to embark on my mission trip to Australia and was spending the weekend before left with my friend again. Friday night another friend came over with two guy friends...the same two guys at the drama practice. We stayed up until the wee hours of the morning talking and laughing with them, and again, I thought, "He is SO cute!" But, as is the custom of really sweet girls who don't steal other girls' guys, I left him alone because my friend liked him. A LOT. So, when the other guy ended up asking me out after I returned from Australia, I said yes...and ended up dating him for over a year.

After we broke up I didn't date anyone for about a year, when who should turn up on my radar but Sound Man. By this time I had graduated from college, moved to the same area, and joined the same church. He had dated several of my friends and...well....he had broken several hearts over the course of the past few years. Not wanting to be one of them, I steered clear of him, especially when he set his sights for me. I had a huge crush on another guy at the time, and one night when I was sick and missed church, my friends came bursting in my room with flowers and a card, laughing their heads off. I thought my dreams had come true and my crush had sent me the flowers, but when I read the note I realized it was actually Sound Man who had sent them to me. I almost threw the flowers across the room. The card sufficed.

I called Sound Man the next day and told him in no uncertain terms that I didn't want anything more than friendship from him. He apologized and I thought that was the end of it. Until one night at church, a few weeks later, I looked up across the sanctuary and saw him talking to a friend. The first thought that popped into my head was, "Man, he is cute!" My next thought was, "Where in the world did that come from?" And into a state of confusion I went.

Sound Man and I were in the same circle of friends, so we were together a lot. We started talking more and more, and he even took me to lunch one day. Just as friends, you know. So why I had butterflies all morning, I couldn't tell you. After that, we were together a lot, and my heart toward him changed. I confessed this to my roommate and she started giggling and said that he had never gotten over his crush on me and still wanted to go out with me.

So, on March 11, 1994, we had our first official date. We went to Cafe' Roux for dinner and then saw "The Three Musketeers" with Charlie Sheen, Chris O'Donnell, and Keifer Sutherland. We had the best time, and I felt very comfortable with him. By May of that same year he had asked me to marry him once. I turned him down! I knew we needed more time. But by July 1, when he asked me again, this time with a ring, I said yes!

Our first wedding date was set for November 5, 1994, but that was not to be. We had a couple of breakups to get through. We broke up mutually in September, got back together, and broke up again (I will leave that one to your imagination) in October. After some major counseling for both of us, we realized that we were both rushing into marriage, and neither of us wanted that. So we concentrated on our friendship, and by February of 1995, we made it official again.

We were married in April on a glorious spring morning. The weather couldn't have been more beautiful. I know this has nothing to do with the weather but I had to throw it out there...please excuse the picture quality...we haven't moved into the 21st century yet and don't have a scanner thingie, so I had to take pictures of my pictures. Or something like that. 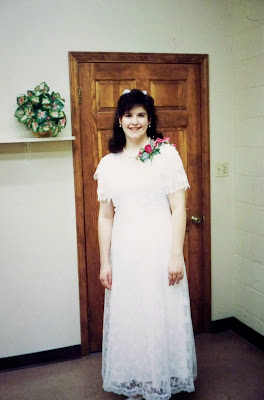 We had a very simple wedding, with only a few guests. We had NO money, and didn't want to ask our parents for any. Hence, the off-the-rack Goldsmith's (which was bought by Macy's several years go, sadly) dress. But it was pretty. And white. 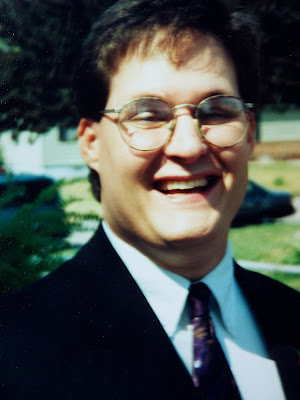 My handsome man. Check out those mid-1990's glasses! He has cute modern ones now. And he's still handsome. 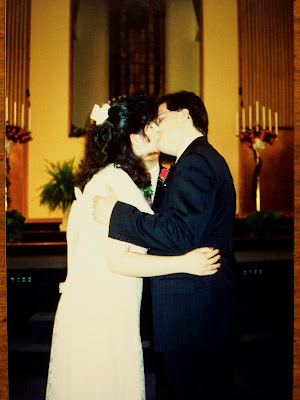 Our first kiss as a man and wife. I hardly remember anything about that day. It was such a blur. But in the almost 14 years that we've been married, I can honestly say that I love him more now than I thought possible when this moment happened. He is still the man I love, the man I wake up to each morning, the man I want to spend the rest of my life with. He is more than a wonderful husband. He is my soul-mate.

Written by Heathahlee at 7:10 AM

Awww, that was so much fun to read! And I love the retro pics! ;)

I didn't even try scanning my faded nearly 24 year old photos! Thanks for sharing. It's good to hear that break-ups don't have to be perminant & can actually work toward building a good relationship.
Thanks for sharing!

I love your love story! Thanks for participating and for honoring your man!!

Awwwww that is such a fabulous story! That was a great read! Hope you have a wonderful Valentine's Day!♥

Love your love story. It's got adventure, drama, and more drama, what more could you ask for! If at the end of the day he's still beside you ( and you want him there) then I'd say your story is perfect. Bumps and all.

Awwww. That love story is way better than a house anyday,right! Look at yall how cute and in love. All gushie and sweet and still at it. God knows what he is doing when he gives us a mate~ Happy sweeties day my friend.

Aww. What a great story! I love a good love story. What girl doesn't, right? BTW - my man and I were married in April '95, too. Here's to many more Happy Valentine's Days!

My goodness. Y'all look like children in those pictures. I'm talking the craddle. I got tickled at the previous commenter that said they loved the "Retro" pictures. I'd have never thought that "back in the day" the 90's would be Retro. I'm still thinking of the 70's as Retro!!

Thank you for sharing...you have not changed a bit...what a beautiful bride...Have a great day tomorrow.

I love the story and even more the pics! Sound man's George Castanza glasses are a hoot!

Love it, love it, love it!!! Thank you so much for sharing your story with us! I love that you were both so willing to let God guide you every step of the way! :) Have a wonderful Valentine's Day!

awwwwwwww, neat story :) and fun to look at pics. I got married in 1992 - with a BIG HUGE HONKIN' bow on my behind (of my wedding dress!)...so did all my friends who got married in the early 90s. I have no idea why we'd follow that kind of a trend!!? LOL
Happy Valentine's Day!
C.

Aww! What a great post! I hope you had a wonderful Valentine's Day!

Haha, yeah I saw Brent's FB. So who is the lucky girl? Is it someone at your church? That is so exciting I just love weddings.

I am a bit late in visiting via the SWAK carnival, but what a great post!