Just call me T.S. (The Stalker)

Since the bulk of my weekend was spent with Kat, the rest of this week's posts will have all the stuff we did in them. But, since everyone else is talking about Blissdom and meeting all the fabuloso people they met, I'd better get on the bandwagon and post my pictures before they are so last week.

Now, I'm sure I've said that I didn't actually attend Blissdom. I just stalked it. Like, major. I mean, knocking on people's doors and calling rooms and even cell phones. Heh, heh, heh. They couldn't get away from me! Kat and I were staying in the same hotel!

Friday when we got to the hotel I called Kimba (A Soft Place to Land) and followed the sound of her voice (well, sort of) to the hotel restaurant, where we caught each other on our phones. It was great. Then we hugged and giggled like we were long lost friends. Then Jen (Balancing Beauty and Bedlam) came over and introduced herself and gave me a big hug, and right behind her was Susie Harris (Bienvenue...). I was beyond thrilled to meet all of them.

Later that night, after the great day Kat and I had, she decided she wanted to relax in the room. I started stalking big-time, and ended up next door in Nester's (Nesting Place) and Emily's (chatting at the sky) room. They were sharing with two other girls I didn't get to meet since right when Kimba and I came in they wanted to turn in for the night. So, Kimba, Jen, and Rhoda (Southern Hospitality) invited Nester, Susie, Julia (Hooked on Houses), and me up to their room. I learned so much just from listening to all the blog chatter around me. Then I finally got the nerve up to ask a few questions, and I'm so glad I did! Rhoda told us about a Windows program that makes it easier to post, and I found out how to make linking so much easier than what I had been doing since April of 08! There were a couple other things I learned that I had to write down because I knew I'd forget if I didn't.

Then, Saturday night Kimba and I kept missing each other. I went around looking for them (I'm telling you, I was a TOTAL stalker!) and ended up at Susie's and Missy's (Southern Queen Bee) room. Missy is Susie's sister. I am telling you, these girls are the real thing. I felt like we had been friends forever. Susie is so dadgum cute it's not even funny, and Missy is as sassy as she is cute. I had so much fun with those two that I kept them up WAY past their bedtimes! I got some business advice from Susie that I'm so grateful for (although I still have a million questions!), and we decided that we needed to get together again soon.

Susie and Missy are connected to one of my regrets of the weekend, though. I never got a picture with them. The two that I spent the most time with and got to know the best, and I never took their picture. I am still kicking myself for that.

I did get pictures with these lovely ladies, though.Me, Jen, Emily, Nester 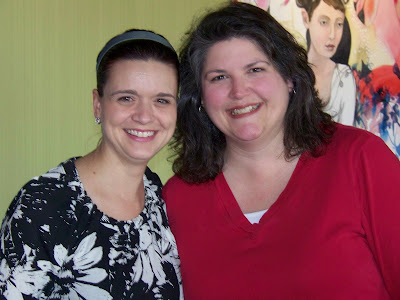 Is it me, or is my head three times the size of Kimba's? I was NOT having a good hair day, either. Dang it, I wish we had all taken pictures immediately after we met the first day! I was looking all cute and stuff. That's when my new profile pic was taken.

I am so grateful to each of these ladies for allowing me to ride the coattails of the conference. It meant so much to me to be able to meet them. I look forward to getting to know them better next year.

Written by Heathahlee at 8:04 PM

I'm on my way to bed but I gots to know! What is Blissdom? Some kind of bloggers convention? It sounds and looks like you had a blast! love ya! Aunt Lauralu

My regret is I didn't go to Susie and Missy's room with you Saturday evening. Just our one little chat at lunch on Friday, and I loved them, too.

Now you sure know how to make a girls head grow opps I meant to say heart two sizes,hehe. Girlfriend,the pleasure was all mine. I cant wait for that post on your familys home. Thats gonna be a good one...I just know it. Oh the stories you can tell us..oh the history!
We will get that picture and we are gonna have some fun doing it! I cant wait till we get to meet again. This time we will have to drag Kathy with us so she wont miss a thing~

I am sooooo jealous that you got to meet everyone. I wanted to go so badly but I couldn't. I sure am hoping to go next year and meet all of you famous ladies!!!!♥

So fun! Makes me wish I'd been there!

You are so kind..I had so much fun getting to hang you. I bet you are missing an ear, I talked it off. Can not wait for us to get together again,lets not wait a year.

You are a total sweetheart, and just like I expected only better....again, wish we had had more time. :)

You were so clever to focus on the hanging out part! Wish we could have done that more!

I'm so glad I got to meet you! I didn't even realize you weren't at the conference itself! It was so much fun hanging out Friday night and talking with all you girls about blogging. Nice to be with people who speak my language! :-)

That is SO neat!

Shell in your Pocket said...

How fun and cute!
-sandy toe

Looks like a lot of fun was had! I hope that you will post the blogger ideas you learned. I would love to find out how to do things faster! Loved the pics...thanks for sharing girl. cherry

Looks like you got to meet all of bloggy world to me! I bet that was fun!

Thanks for your comment today! I thought the shelves were cute too! They're too tiny to be called anything else!

Hey girlie! I may have a person interested in a rooster tassel. Would you be open to making one for her? I told her about you and Im waiting to hear back from her... Hope that's ok. Miss ya!

Ok, now here's MY true confession...I feel like a stalker just listening to you talking about being a stalker...I don't even know how it all started: now I am linked up with all your all's blogs - Kimba, Nester & her sis, the whole "PRaying for Harper" group, etc....and all I ever did was sign up at blogspot and start reading "stuff"...weird?!
Anyhoo: the point of my post is you all are SO COOL - and then I was reading the comments on WARM AS A CUP OF COFFEE"s blog about Feminism - and YOU said, "I agree with Conny." WHOA - Conny? That's ME. (gulp!) I was recognized (just for my comment but still...). A little thrill for my stalker life. Anyway, thanks for agreeing with me....and now I will stalk your blog some more!! God bless you :)
Conny @
thehutchhaus.blogspot.com

Heathahlee,
Thank you for stopping by my little ol' blog :) and for the great "words of wisdom" about blogging. I guess I qualify: I'm just an "ordinary" person (well, depending on whose opinion you listen to!) too. Ok, and thanks to your advice, I am now not only a stalker's stalker, I am your follower :) That sounds less threatening: follower vs. stalker. Yeah, I'm just a little ol' harmless FOLLOWER. :) Do not fear me :) God bless!! Keep up the fun blogging.
Conny