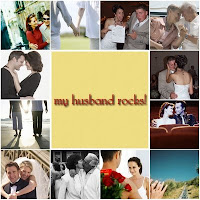 Sound Man thought I thought he didn't rock anymore because it's been so few and far between My Husband Rocks! posts. Sorry, baby. You know I love you more 'n my luggage. And you know that I know you totally rock.

I have waited all week to share this with y'all. If you've read my blog at all you know I think my husband is the best thing since PB&J. I'm always proud of him, but this week he just went overboard. He started his own blog! Now, he had one before, but posted only a couple of times before he just quit. He didn't have time for random thoughts. Seeing as how all my thoughts are random I have plenty of time for mine. Of course, just his starting a blog isn't what I'm proud of. He is using the blogosphere to keep him accountable in his weight loss journey. Man, that's accountability! Between him and Kat, they'll have me on here being all accountable. Whatever.

But back to my original thoughts. A few years ago, Sound Man decided he wanted to run in a 5k to benefit St. Jude's Research Hospital. I thought he had lost his mind. But he showed me, and how. He started in May training for a race in July, and by the time the race came, he was completely hooked. He ran in at least 5 races from July 3 through December, losing 40 pounds in the process. On his December 2nd race, the temperature was a very cold 28 degrees. He raced his heart out and by the time he was done I was really concerned about him. After that day, his lungs never felt right to him, and he ended up with two bouts of pneumonia over a period of three months. So bad that the second round landed him in the emergency room. Needless to say his racing was over for a while. Even after he regained his health, anxiety over what might happen kept him from getting back out there. His weight crept back on, more swiftly than it had come off.

He gives blood on a regular basis, and over the course of the last year each time he donated, his blood pressure got incresingly higher. Realizing that this wasn't something to fool around with, he decided to join a weight loss competition at work. I'll let you read about how he's doing at his blog, Sound Man Weight Loss.

As proud of him as I am, I also want to be encouragement for him. I know if you hop over there for just a second and cheer him on, he would love it. He loves my bloggy peeps almost as much as I do!

When the alarm sounds at 5:30 and he crawls out of bed, aching for just ten more minutes...when it's so humid outside it feels as if every breath is a gulp of water...when he doesn't think he can go one more mile, but does anyway...he so very much ROCKS!!!

And I know Sound Man will do impressive stuff with this. Also, how impressive he REGULARLY gives blood. The Bob and I have done it...like 7 years ago.

It sounds like he is going to have a great blog with his weight loss. I have never been able to run and keep my breath so I am in awe of ANYONE that runs any distances. I know you are proud of him!

I really wish I could manage to jump on the weight loss bandwagon!!