Richella sent me an email asking me if I was still on the planet. Not really. But her sweet concern for me reminded me of why I love my bloggy friends! I haven't gone anywhere. Well, maybe a little crazy, but that's a given. I thought I'd hop on here and give you a little update about what's happenin'.

Today, they took the Green Big Van away. Kiddo cried. Honestly, so did I (almost).

See, a few weeks ago we were doing this really stupid thing. We were sitting in the turn lane waiting patiently for our green arrow to turn.

What, you were expecting something else?

Here's a math question for you: When a car going west at 40 mph hits a car going north at 20 mph, how long will it take before said cars crash into the green big van sitting still at the red light?

Here's the answer: NOT LONG.

I had the same gut-wrenching reaction as I did when I had an earlier wreck several years ago, which actually prompted the purchase of the GBV. Kiddo was looking down when he heard my gasp. He looked up just in time to see the Mustang that had been hit by the VW Bug slam into our front end. Somehow I calmly grabbed our stuff and got out, trying to calm Kiddo down as well. I didn't fall apart until hours later when Sound Man had gotten us home.

Looking at the pictures, you don't think there's that much damage, but it actually bent the frame, which costs major moolah to fix. 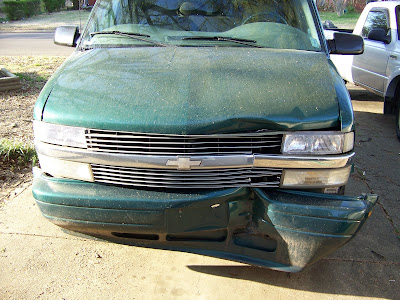 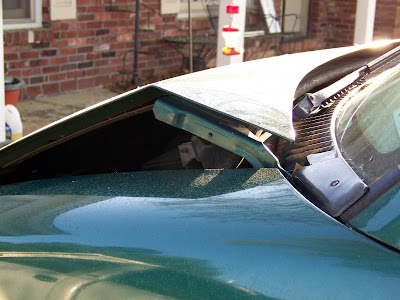 Please excuse the yellow dust which is actually an oak tree pollen/sap mixture that is like concrete when it gets on your car. Oh well...I didn't really see a need in washing the van after the wreck.

Needless to say, they totaled my 12 year old van. Kiddo doesn't really remember any other vehicle. He was only three when we got it, and when I told him the wrecker was outside taking it away he cried. I have to say, as much as I complained about its size, all the stuff wrong with it, etc, etc, I did have a twinge of sadness as I watched the salvage wrecker getting ready to haul it away.

We are going today to look at a car that quite possibly might be its replacement. I'm praying the Lord leads us to just the right one. This one looks promising, and I'll have to tell you why later. It will be an absolute answer to prayer and a "See, I told you to have faith!" from the Lord if we get it. Not that He doesn't say that to me ALL the time, but there was something specific I was praying for.

Dealing with all the insurance companies has been less than thrilling. Having to take a pittance for what my car was worth to me has been more than stressful. All because I was in the wrong place at the wrong time. I know God has a plan. I can do nothing but trust that He has my best interest at heart. I mean, would my Dad not help me in a situation like this? Yes, he absolutely would. I know that my heavenly Father will do much more than help. He will provide. He has already orchestrated my friend Jennifer buying a new car so that I could borrow her old one.

I'm looking forward to see what comes next.

Written by Heathahlee at 2:02 PM

I was a little sad when you told me they were there. I look forward to what God is teaching us in this. Thank you for being such an awesome woman!!!

Well, thank God you and your son weren't hurt, Heather! Sorry you have to deal with all the after stuff; I know it can be a pain.

I do hope there will be a speedy resolution to this situation soon. Sorry about the Green Big Van. But I'm so thankful that it was only the van that got bent out of shape and not either one of you!

Thank goodness you or kiddo were not hurt. That looks scary to me!! So sorry you are having to go through the crud with the insurance company. Hopefully, you will end up in the PERFECT vehicle.

Hey girl--You're the sweetest thing. Thank you for the link!

Three years ago, my oldest son got his driver's license. He was sitting at a red light, patiently waiting for the light to turn green, not using his cell phone, not texting, not doing any of the things you might accuse teenage drivers of doing. . . when an elderly woman plowed into the back of him. His car sustained such damage that it was in the shop for six weeks. . .and lost several thousand dollars in value. I mean, it wasn't a treasure, but it WAS worth some money, and it felt kind of like being robbed for it to just vanish because of someone else's impatience.

Anyway, he wasn't hurt, and all is well, but I remember the hair-pulling-out frustration of those weeks. I hope along with you that there will be an end to this story that will be even better than what you would have had without the inconvenience and frustration.

You're awesome; did you know that?

Megandvd@Beauty in the Attempt said...

Your kiddo crying reminds me of when my parents' orange bug finally died. It died on our trip to Cincy....needless to say..I cried when they towed that car away. I think it was the first time something in our "family" was taken away. Both my sister and I were brought home from the hospital in that car...memories.

Hope you will be directed. I have missed you too...blogging is never the same unless all my friends are out and about. :)

I've only had one bad accident in my life and my daughter was with me at the time. We were coming back from a pool birthday party and she still had her bathing suit on and wet hair. She had nightmares for a few months after that, but now doesn't even remember it happened!

Oh Boo, I love my old car too and might have to give it up soon. They kind of become like your favorite slippers. Hard to give up, even when they look bad.

I can't wait to see what God has in store for you in the vehicle department!

And yes, I'm sure we would come paint your bathroom if you fed us!