Yesterday was a very special day for me. Usually on Sunday mornings I'm very busy with singing and practicing and generally running around in my happy place. But yesterday was different. The youth took over church. Not really, but they did lead us in worship (oh, MY but we have an awesome youth band!) as well as served the Lord's supper.

For those of you who aren't familiar with that, it's the ordinance that we observe reminding us of the sacrifice Jesus made for us by giving his life for us. Only recently did I connect what Jesus said at the Last Supper to the sacrifice God told the children of Israel to do at the first Passover. But that's another post...

Back to our day. Since my Kiddo will be in 7th grade this year (WHAT??? This can't be happening!), he was asked to serve the Lord's supper with the other youth. Oh, how that made my heart happy! Seeing him standing there with his funny cafeteria-lady gloves on, handing out pieces of unleavened bread...it almost made me cry. I normally do during the Lord's supper, but I guess I was focused too much on Kiddo. He was supposed to say something like, "This represents the body of Christ, that was broken for you," and if he had, it would have been all over for me. He said he did during first service, but since the boy handing out the juice didn't say his part, he felt too much peer pressure to say it second service...sigh....anyway, it was enough that my son served me the Lord's supper. 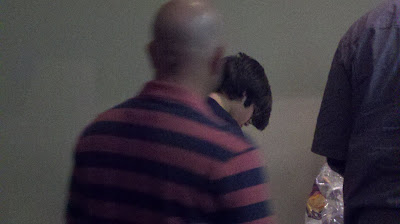 Sorry for the not-perfect picture...there were SO many people in line,
and he was having to break pieces of bread to have enough to serve.

Then, that afternoon, we had what we called iServe Volunteer Training, where we took people who were interested in serving ANYWHERE in the church, from nursery to technical stuff to greeting to missions to...well, you get the idea. We also gave people the opportunity to rehearse with the worship team and sing in a huge choir that evening in a celebration service. We included any and all youth who wanted to come, even if they weren't old enough to be in the adult choir. We will be having a youth choir every few months and wanted to let them know we value their gifts as much as the adults'.

Since Kiddo is now a youth (again...WHAT???), he wanted to be a part of that! He was excited (and not a little nervous!) to be learning a specific part for the first time. He can sing alto with his momma like nobody's business, but learning the tenor from someone other than his mom was going to be brand new, and he was almost sick with anticipation. But he persevered, and by the time the whole choir got together, he was still nervous about singing the right part, but he was up there with all the adults and the other youth. 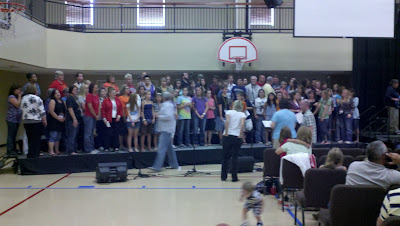 You can't really see Kiddo in this pic...but take a look at how many altos there are!
From the girl in front in pink over to the left, that's the alto section!

At the time, I didn't have time to focus on the fact that my son was singing with the worship team that I was directing. But then, as the service started and we were singing great songs like "God of This City," and "O The Blood," it hit me...my son was singing in the worship team...I was directing that team, and my husband was helping run sound for that team. All three of us in the same ministry, doing different things, serving the Body of Christ.

And it was almost more than I could stand. I just stood there, with my hand raised in the air, huge smile on my face and tears streaming down my cheeks, thanking the Lord God that He saw fit to bring not only myself into this ministry of leading worship, but also my husband and son.

What grace He has poured on me!

If you'd like to read other stories of Grace Imparted, Richella at Imparting Grace would love for you to visit and even share your own story. I'd love for your to share a story in a comment on this post, as well!

Oh, yippee, Heather, I'm so glad you got the pictures so you could post this!! What a wonderful, wonderful story of God's goodness! To serve right alongside those you love the most--all of you serving the God who gave you life and gave you each other--OH! Who wouldn't be overcome?? Pure joy.

Thank you so much for linking up and for helping me spread the word! Love you!

Awwww. This is the second time in two weeks that I deeply miss going to church with you. Remember when I told you we had the sermon on David and Jonathan and couldn't quit thinking about you? That was time number one. This post is time number two. <3

Awwww, you must be such a proud Mama! :)