Although Ken and Gae were my pastoral family while I was in Tasmania, I was never privileged to stay with them, as Keith was. I did, however, get to stay with some unforgettable people over the course of the summer, each for two or so weeks at a time.

My first hostess was Heather. Not easy to forget her name. She was a widow whose daughter had just gotten married. I think I filled a void for her...she enjoyed "doing" for me as much as I enjoyed staying with her. She made the best pumpkin soup. Yes, pumpkin soup. More about the plethora of pumpkin later. Heather was the sweetest, most hospitable lady I met while I was in Tasmania. She and I just really clicked. When my weeks with her were up, I begged Ken to let me stay with her the whole summer, because I knew she would get lonely. Ken said that he would if he could, but that other families wanted the "privilege" of keeping me. Whatever. So, to the next home I went, however begrudgingly.

I soon got over myself after I arrived at Dianne and Des's home. While Dianne may have been a bit overbearing, she would do anything for me. And Des was just as easygoing as Ken was. He tried his best to give me an Australian accent, starting with the word "Hi!" but it never happened. Their youngest, Stephen, was at home while I was there and we spent many evenings playing Nintendo. Just like leaving Heather's, I wasn't ready to leave Dianne and Des's place.

Paul and Maxine were next, along with their two kids, Nicole and Trent. Maxine and I were the closest in age of any of the families I stayed with, and we connected very quickly. Paul and I really never talked, because Maxine and I wouldn't let him get a word in edgewise! I will never forget staying with them. I loved playing with the kids and the various animals they had around the house.

One little abandoned lamb stole my heart. Maxine made a little hut for it outside with a crate and some hay. No bigger than a small dog, it scampered and played with the children, and I enjoyed every minute I got to spend with it. One morning as I came in for breakfast, Maxine informed me that the lamb had gotten too cold the night before and wasn't doing very well. She had brought it inside to stay by the wood burning stove. In my mind, I saw the sweet little lamb quietly standing by the fire, getting warm and enjoying the treat of being indoors. When I came into the living room I asked Maxine where he was and she pointed me to the side of the stove. In a basket, wrapped up in blankets to try to give it warmth, was the little lamb. It was as near death as I'd ever seen anything.

Maxine had to go out for the day and I kept the kids, offering to try to feed the lamb every once in a while. Maxine showed me what to do and after she left I got the bottle, picked up the sick lamb and tried to get it to eat. It refused to eat, choking on the milk and bleating pitifully. I tried not to panic, and a little while later tried to feed it again. Again, the poor little thing refused. At this point the kids were realizing the lamb was not getting better, and I was terrified that the lamb would die and I would have to explain it to them. One last time I wanted to try to get the lamb to eat, but when I reached for his little body, it was cold to the touch. He had died, and it took more restraint than I had ever had not to scream "NO!!!" and burst into tears. But for the kid's sake, I kept a brave face and played with the kids, keeping them away from the lamb's body until Maxine could get home. Later that night I wrote a letter to my friend Amy and poured my heart out, crying the whole time.

Even though my saddest memory was at Paul and Maxine's, I still loved them dearly, and, as was my pattern, did not want to leave. This was for the last time, and it tore at my heart to know that my summer would soon be over. I honestly don't remember very much about living at John and Elaine's, with their two daughters Jodie and Tammy. I think it was because I was getting very worked up about leaving. I will say that their home was where I learned the benefit of a hot water bottle at the foot of the bed on a cold winter night! But they were just as hospitable as any of the other families, and I'm sad to say I didn't get to spend more time with them. 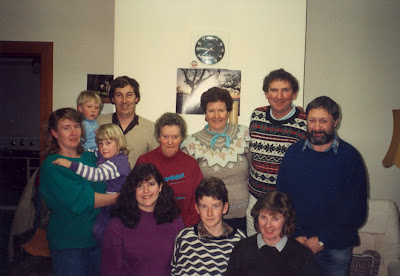 Written by Heathahlee at 9:23 PM

I love all your character development! You are so honest and forthright about them so I really feel like I am getting to know these people and that situation. Well done.