More Than a Sparrow

Today was a snow day. I mean a SNOW day. As in, (you gotta hear this in a movie big voice) SNOWMAGGEDON III: Fear the Frost! Frost Frost Frost...

I crack myself up.

Now, we got nothing like the Midwest did earlier, but for us, this snow storm crippled our area. This is the first time I've been scared for my husband to drive home. I begged him to leave work at 1:45 when I started hearing reports of 5 car pileups and road closings. I wasn't worried about HIS driving...it was all the crazies out there (you know, the ones who have to drop everything and BRING THE BACON!) that I was worried about. A friend of mine said her husband counted no less than 20 cars that had run off the road on his way home from work. A trip that normally takes thirty minutes or less took my husband an hour...which was REALLY good time, considering so many people had hours of driving instead of their normal minutes.

At one point in the afternoon, I had gotten so worked up about him coming home I was almost in panic mode. I had to do something to get my mind off of it, so I trudged outside and fed the birds. I made sure to put some seed on the porch so they would come up to the window where I had been sitting.

Sure enough, minutes after I sat back down at the computer, I could hear the peeping of juncos and white throated sparrows. I looked outside and there were at least three juncos and a sparrow...and I was reminded of the verse that Kiddo was reviewing for Awana this week. I asked him to say it to me, and without hesitation, he quoted,

"Are not five sparrows sold for two pennies? Yet not one of them is forgotten by God. Indeed, the very hairs of your head are all numbered. Don’t be afraid; you are worth more than many sparrows." Luke 12:6-7

My heart was immediately filled with peace.

Sound Man returned home without a scratch, and I learned my lesson. As children of the Most High God, we are so much more than sparrows...we are not forgotten...we do not have to be afraid! Thank you, Lord! 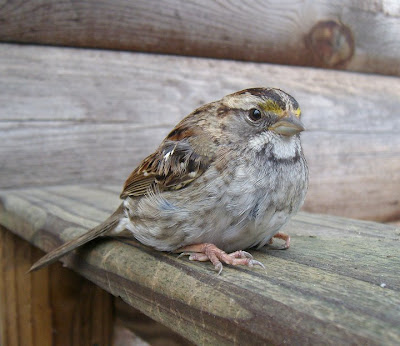 Written by Heathahlee at 9:16 PM

I know how scary that can be, Heather! My day job is 15 minutes, tops, from my house. One year it took me 2 1/2 hours to get home! Starting last year when we got so much snow I told my hubby to pack a bag and he goes and stays at his sister's when we have bad storms {she lives closer to where he works}. Then he texts me when he has arrived. I always feel relieved once I get that text.

We are so prone to worry and fret and control every little thing.

I used to beg Alan to come home at the first site of snow because we have a ton of BRING THE BACON crazies around here too. I finally gave up and this last snow it took him 3+ hours to get home. I don't think I will ever have to beg again. ;)

I have to go watch that video again now, it cracks me up!

Love the new banner and blog layout. Dejunkin' my blog has been fun. I moved a bunch of clutter all the way down to the bottom and into pages too.

A wonderful post, Heather! Wow, was that some timing with this week's Awana verse, or what?

I was telling some friends today at Bible Study that I'm a fretter from way back. Way, way back. As if fretting could add one day to my life, or one cubit to my stature. Dear God, I need to pray sometimes, please rescue me from myself.

Thank you for this beautiful reminder!

This is something that I struggle with often - worry and anxiety. God often has to remind me of His love and hand on my life. Great post!

Gosh, I wish we would have gotten at least a flurry or two. But to be honest I am really tired of the gray skies, ready for a little sun.

Thanks for following me on my new blog. You saw the mess I made with my other one, so I just decided to start over. Good luck with your make over. I am sure it will look great!