The other day my 11 year-old Kiddo went down to the end of our cove to meet the kids that live down there. He is not what I'd call shy, but he's not the most outgoing person when it comes to meeting new people. Kind of like me. I'm as loud-mouthed and crazy as anybody else when I'm with my friends, but put me in a situation where I don't know anyone, and I'm a regular wall flower.

Anyway, these boys have lived there for several months, and Kiddo had just gotten the courage to talk to them. He came home a few minutes later, saying he really didn't want to be friends with them because they "cussed." A lot.

Now, I have to say that I'm proud of my son for not wanting to be around that kind of language. His daddy and I have hopefully taught him that is not honoring to God, just like watching t.v. shows (or commercials for that matter!) with scantily-clad girls on them is not honoring to Him. He is almost paranoid about that one. That's fine with me.

Sorry...back to my story. Sound Man and I talked a little about Kiddo reaching out to them, but then we sort of didn't bring it back up for one reason or another. Well, evidently it's been on Kiddo's mind. Yesterday we were eating lunch at my favorite establishment and we started talking about those boys again. Kiddo finally decided that he needed to do something. He decided that talking to his pastor, Bro. Jack (our children's pastor) was what he wanted to do. Mom has only so much to say on the subject, after all. Heh.

But it's what he said next that broke my heart as much as it made me happy. He said, "I need to talk to Bro. Jack as soon as I can because they could die tonight and not ever know Jesus or go to heaven!" Oh, that I would have that urgency for those around me!

We did go see Bro. Jack today, and now Kiddo has some ideas of how to get into their lives without them (or more specifically, their language) getting into his. He does want them in his life...just not their influence.

I have no way of knowing if my sweet son (that my mother thought from the day he was born would be the next Billy Graham) will stay on the path the Lord wants for him. We as his parents can do our best, parenting the way God teaches us, but ultimately he will make his own choices. One thing I can do now to ensure I am doing all I can is begin praying Scripture over him. 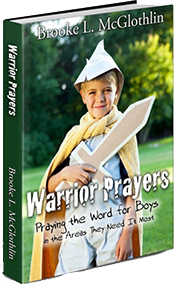 The other day I introduced you to Brooke McGlothlin, author of the new e-book, Warrior Prayers: Praying the Word for Boys. She has issued a challenge for the month of April: "21 Days of Prayer for Sons." If you want to begin praying for your boys in earnest, I encourage you to hop over to Brooke's blog and read about it.

Oh, and you don't even have to have boys to participate. Do you want your daughters to marry men who've had their lives prayed over? I would!

Don't forget that I'm giving a copy of Brooke's book away! You must go to the giveaway post and comment to be entered to win. If you are reading this after February 25th, you can buy Brooke's book for only $5.97 here.

I'll keep you posted on how Kiddo reaches out to his neighbors.

Written by Heathahlee at 5:37 PM

I just love your attitude about this Heather. We love to think we are in control of our kids and the outcome of their lives and ultimately, we're just not. But we do have a GREAT, BIG, GOD who is!

When, as moms, we leave this life all that will remain is the truth we have poured into the lives of our children and others. Thank you for equipping and encouraging your son to live for Jesus. In doing so, you will continue to influence future generations for Christ!

That is wonderful! I agree, I wish I was outgoing about my faith right now.
~Kimberlee
www.TheSpunkyDiva.com