Flood of the Century

Yesterday was bittersweet. But mostly sweet. I had my moments of tears about not having Momma this Mother's Day, but my guys helped me through the whole day. I had decided I wanted to go to downtown Memphis to see the flooding (high entertainment, no?), so that's what we did. 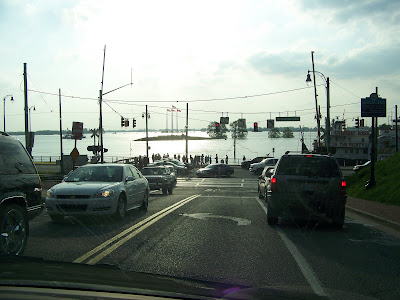 Traffic was INSANE. Seems we weren't the only ones who wanted to see the historic flooding. Coupled with the fact that some of the streets had already been closed for Memphis in May (which, of course, was moved to another location in the city because of the flood), it was CRAZY. But we found a parking place (for free, even! Unheard of downtown!) and headed down to the river. 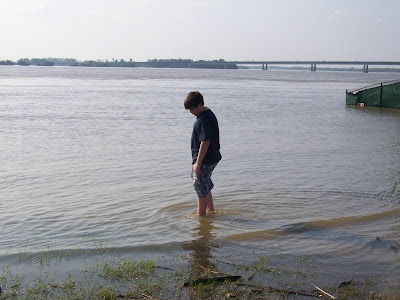 First, Kiddo took off his socks and shoes and waded in the water, just to say he had been in the Mississippi. I have to admit that even though I was a little nervous about this, I did the same thing. After we got back to the car we couldn't get home fast enough for us to wash our feet and legs! 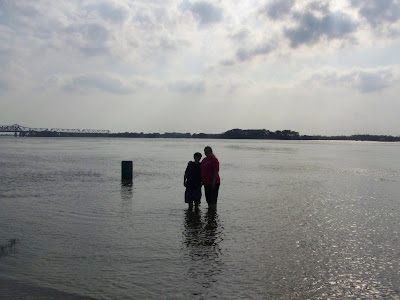 Sound Man was quite content to stay dry and take pics. See that rectangle to the left in the pic? That's a sidewalk light. As in, there's a sidewalk under the water there. In fact, there is a sidewalk, then about 20 feet (if my memory serves me right) of grass before sloping down another (normally) 50 feet or so to the river. You can see how far it's come up better in these next pictures. 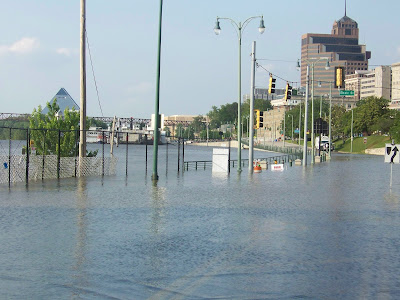 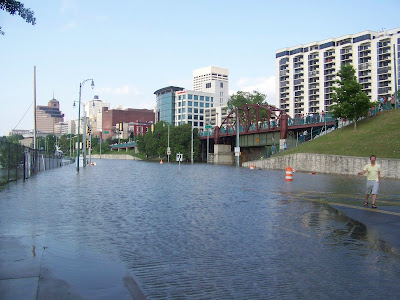 Another view of Riverside and Beale. This is the route we ALWAYS take to get downtown. It's so easy because Interstate 55 actually becomes Riverside, so we just hop on the interstate in our town, drive about 25 minutes, and we're downtown. Seeing it like this is unreal. 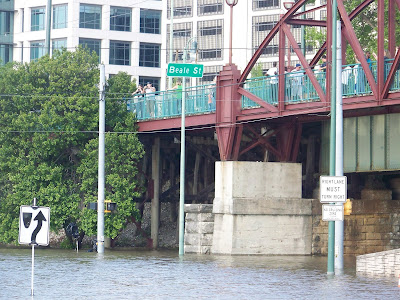 There were so many people just walking around taking pictures. The bridge was full of people, so we decided not to go down there. Actually, because of my breathing issues, I just decided I had had enough and needed to get in the car. But you can see in the picture above exactly how deep the water is on the street. 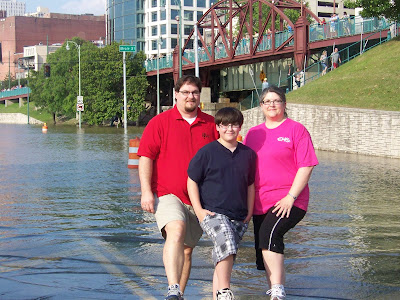 Family pic at the flood! Someone had rolled a log in the middle of the street for photo ops. Ha! So we did what everyone else was doing and had a friend we happened to see down there snap one for us.

I mean, we've NEVER seen the Mississippi River up this high before, and I'm praying we never see it like this again. So a picture is in order, I think.

As interesting as it was to be down there and see it like this, where no one is threatened, just a few miles away hundreds of people are being evacuated because this same river is not just coming up their street...it's coming into their homes. For so many of them, they have no insurance. They have lost or will lose everything. Please join me in praying for them. For their safety, for their provision...for the river to go down quickly!

Written by Heathahlee at 3:25 PM

Wow! That is terrible! I'm glad your home is safe.

Wow. I cannot even fathom this. My prayers are being sent your way. Thankful that your home is safe and so are you.

Crazy!! Hopefully it won't get any higher! We didn't make it down town when we were in Memphis on Sunday...