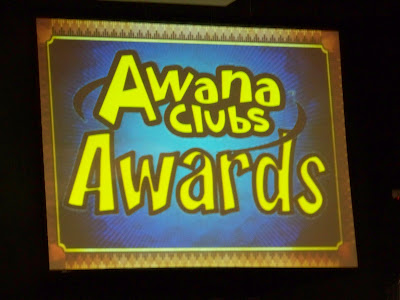 My Kiddo has been in AWANA (Approved Workmen Are Not Ashamed, from II Timothy 2:15) for seven years, starting with Cubbies when he was four years old. Over the course of seven years, he has learned about 600 verses. Yes...SIX HUNDRED verses. Now, of course, he can't recall every single one of them at the drop of a hat, but the point of AWANA is to get God's Word in kids' hearts. And it has done the job with my Kiddo. He has taken comfort in Scripture when he's been afraid, when he's been sad, when he's praying for a lost friend. Speaking of praying for a lost friend, he has become so confident in sharing his faith because of what he has learned in AWANA that he was able to have an intelligent conversation with a 15 year old agnostic cousin about his need for a Savior. I was so proud of him as I eavesdropped (Oh, yes I did!).

Last Wednesday night was our AWANA Awards Night...Kiddo's last as he will be moving up to Jr. High and we don't go further than 6th grade T&T at our church. He has worked so hard that he got the highest award for his age group, the Timothy Award. He has completed so many books of verses and activities I've lost count, but I know that it's at least 600 with the regular books and workbooks he's completed.

Not only do the kids learn verses, they also play games, and Kiddo was asked to help demonstrate one of them for us. He's the last one on the left, the last one to throw the bean bag to the runner.

They have a lot of fun and even participate in AWANA Olympics, which in our area is a BIG deal. Churches from all over the area participate.

Kiddo couldn't have done as well as he's done without the help of his leader, Mr. Mike. 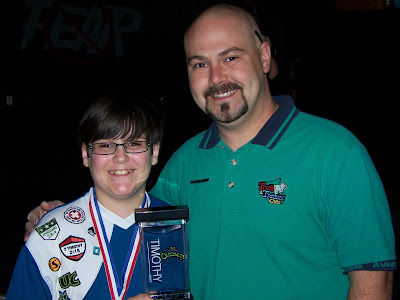 He pushed Kiddo when he knew he needed to finish, and has encouraged him along the way. 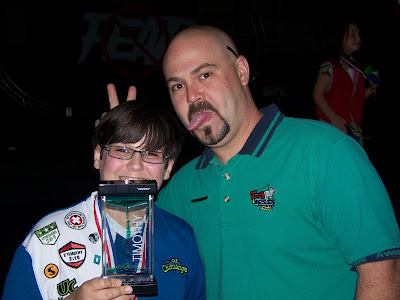 I'm so proud of my son. He has worked so hard...by the way...because of the weird way we did school he started AWANA a year behind his actual grade. When he entered 5th grade T&T, we all realized he needed to catch up in order to earn his Timothy Award. He learned all those verses in 7 years...it normally takes 8.

Congratulations, my precious Kiddo! I am so proud of you!

Congratulations to my Sweet Nephew!

Yes, congratulations! We know how tough it is to memorize all those verses. good job!

Can you believe Noah just completed his first year of AWANA? He absolutely loved Cubbies, I hope he loves it as much as Kiddo and continues for many years.

an amazing accomplishment to celebrate!!! yahoooooooooooo!