Forsaking All Others - A Tyndale Review

In case you didn't know, I'm a reviewer for the Tyndale Blog Network. I receive free products to review in exchange for an honest opinion about the product. To see the other reviews I've done, click here. 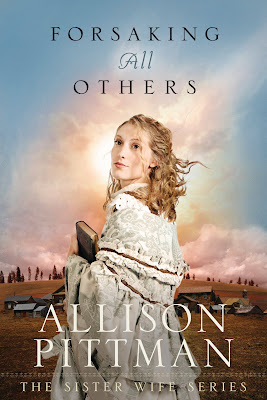 This time it was a work of fiction called Forsaking All Others, by Allison Pittman. I didn't feel like I had missed too much by not reading the first book in the series, For Time and Eternity.

Pittman's heroine is a young woman named Camilla Deardon Fox, who has turned her back on her Christian family and upbringing to build a life with Nathan Fox, a charming, handsome young Mormon who stole her heart completely. What she didn't realize in all the promises he made was that she would eventually have to share her husband with another woman...a sister wife. After facing two crises in her life, Camilla turns back to Christ and the faith she had left behind. She comes to the conclusion that she must escape the lifestyle of the Mormon church, even if that means leaving her daughters behind until she is able to come back for them.

From the back cover of Forsaking All Others...

"Camilla Fox is alive, having been rescued from a near-fatal snowstorm...Under the personal care of United States Army Colonel Charles Brandon, thoughts of the two children she left behind flood her mind, threatening to break her heart. (She) is desperate to reunite with her daughters and does not want them to grow up under Mormon teachings, but she cannot provide a home for them on her own, and she will not share her husband with a sister wife. As spring arrives, Camilla returns to Salt Lake City to fight...and she won't back down until she's brought her children safely to the other side."

Crafting a novel that stays true to history and connects the reader emotionally to the characters, Pittman kept me turning page after page. I could hardly put it down, wanting to know how Camilla was going to face each hardship in her way as well as how she was going to deal with her ever-growing friendship with Colonel Brandon. She puts her trust in the One true God, knowing He will not forsake her as she seeks to bring her daughters up in the Truth.

I look forward to any sequels Pittman might write after this book (she certainly could after the ending, but the book concludes without the need for one).

I was compensated for this review by receiving a free copy of the book from Tyndale Publishing. The review is my own opinion.

Written by Heathahlee at 3:54 PM