Y'all didn't know I'm famous, did you? Well, actually a group of 9 of us (and a half if you want to count the baby) are famous. We even had the fire department at our beck and call. That's right. And when I say famous I mean relatively. Or Relevant...ly. Where was I?

Okay, seriously, Wednesday night as a couple of groups of us were done with our downstairs stuff we were chatting at the elevator, not paying attention to the sign that said "Please limit to 6 people" or something like that.

So...NINE (and a half including the baby) of us crammed into the elevator, hit the buttons for our floors, climbed up to floor 5 (mine and Aurie's floor), and stopped. Nothing happened. No door opened. No more movement. Nothing.

We. Were. Stuck. On an elevator.

For a while, it was okay. Some might say fun, even (some might not). We took pictures and laughed. Teri Lynne called to tell the hotel we were stuck. They sent someone supposedly to get us out, but to no avail. 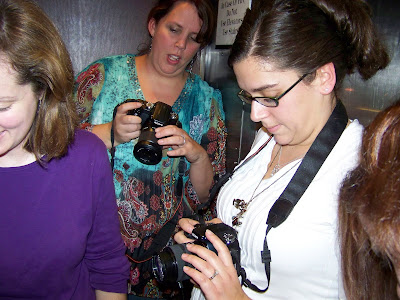 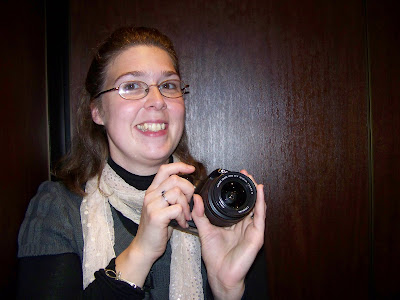 Then it started to get hot. Stifling, actually, with no air circulating. After thirty minutes Jamerrill called back, told them there was a baby on board and wanted to know the status (he was SO precious and couldn't have been a better stuck-on-an-elevator baby). 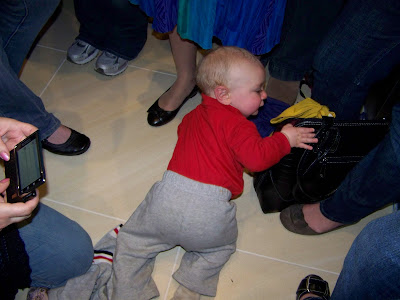 They kept reminding us that the sign said no more than 6 people were supposed to have gotten on ("Yeah, yeah, we got it! But that doesn't help us now!" was the general consensus of the nine), and they told Jamerrill that at that time no one was there working on the situation...that they had to wait on a supervisor and no one could do anything until that person got there.

So, Jamerrill did what any of us moms would have done in the same position. She called 911. We tweeted to Alle (mine and Aurie's other roommate) to come tell us if we were between floors or if we were at a floor. She ran around trying to find us and finally we were able to hear her sweet voice outside the door. However, there was nothing she could do except give us moral support!

After waiting for over an hour, the doors suddenly flew open and we burst out of that tin can like Dr. Pepper out of a shaken 2-liter. I felt like I could actually drink the air it felt so good. As we sat recovering from our ordeal on the 5th floor landing, the stairwell door opened and a fireman came in, asked us if we were okay, and went back down to do some more investigating. 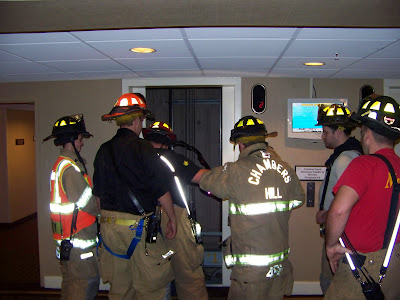 Whatever the problem was, it got fixed, and yes, I did get back on the elevator. But not with that many people. How ironic is it that the sign we should have seen is in between the firemen in this picture...I'm smiling big looking at this:

How tiny is that sign! And NO WHERE else in the hotel is this sign...a definite problem in our opinion. Oh, well...lesson learned.

Here are the videos we took while trapped. Pretty good, considering we were suffering from lack of oxygen. Here's Jendi's version (a fun 3 1/2 minutes):
I really was delirious...I had been up since 4:30 that morning and it was LATE.

Here's mine (a mere 30 seconds):
Since there was a Smilebooth set up the first night of the conference, we HAD to have our picture made together. 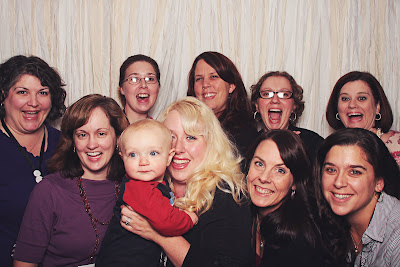 So there you have it. #Relevator11 ...the coolest hashtag around.

Ha ha! Love it! You guys made such a great memory! Although I am glad I wasn't in it...ha!

Oh my goodness! I heard about the relevator incident, but seeing the video just makes it more real! So sorry you all were stuck for so long! That was really, really, not cool on the hotel's part.

Oh that is so funny, but not really. One of those funny now that it's over moments. I'm glad I met you and Aurie for the first time outside of the elevator instead of inside. Love ya!!

Thank you for the comment on my last post. I know what you mean. Wish we could talk more, but I guess that's why we like blogging so much. Talk all we want with no interruptions. :)

don't know how I missed this post last time I was here but I love it!

Only at a blogger conference would there be that many women with cameras ready to take pics of being stuck in an elevator! While I wish I was at Relevant with you I am glad I wasn't in that elevator with you! You should be glad too, I would have been curled up in the corner sobbing :) (not crazy about elevators especially the stuck kind!)