Today would have been my Grandaddy's 99th birthday. When anyone would ask Grandaddy when his birthday was, he'd give them the same answer, "Five Nine Oh Nine," meaning May 9th, 1909. It's hard for me to fathom that had he lived this long, he'd be a year from being a century old. 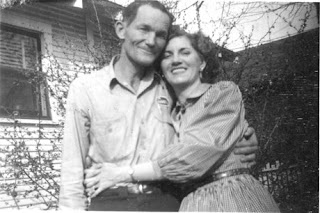 He passed away in November 1995, just a few months after my sweet hubby and I were married. Even now, 12 1/2 years later, I still miss him so much. Grandaddy and I had a special relationship. I think it may have to do with the fact that he ran over me with a lawn mower. I know, I know, it sounds so awful, and it was, but it really was an accident. Come to think of it, I now believe THAT is when my falling down began. I was five years old, swinging on a post on our back porch, which was about four feet tall, just as my Grandaddy was mowing with the riding lawn mower right up beside the porch. You guessed it, down I fell, right in front of the mower. He didn't have time to stop. I was cut pretty badly, but my wounds didn't compare to the heart wound my Grandaddy suffered by hurting one of his precious grandchildren.

I have so many memories of my sweet Grandaddy. Of his always being tan from working in his garden, the bane of all us grandkids' existence in the summertime (I HATED having purple fingernails from shellin' peas!). Of his sitting at his CB radio, listening to the chatter and joining in if he heard someone he knew. His CB handle was "Mr. President" and Mimmie's was "First Lady." They had a plaque on the wall that said so. I also remember that his CB radio wasn't the only radio he would man. Every time one of us would go out for the evening he would head to his post beside his scanner (the kind that picks up police and fire dispatches), listening for the calamity that he was convinced would befall us one day, and he did not want to be caught off guard.

My sister and I would often laugh at his overprotectiveness. One night as we were headed to the Orpheum to see Harry Connick, Jr, Grandaddy noticed that Carlyn's dress had a "hole" in back. He asked her if she was sure she didn't want to wear a sweater to cover that up. We laughed and shook our heads.

Since Grandaddy lived with us, I got a little impatient with him from time to time. Once, when I was in college, I was preparing to head back to school, and Grandaddy said something to me about making some tea cakes for him. Tea cakes are basically sugar cookies, with just a little bit of fluff to them to make them sooooo good. I loved tea cakes, but I just didn't want to waste the time at home to make them. I told him I really had to get back to school, so I couldn't right then but next time I was home I'd make them. He looked so disappointed I tried to shove my guilt far enough down that it didn't slow down my plans. I dutifully kissed him goodbye and hopped in Bonnie Blue, my '86 Corolla. I got about a mile down the road when the thought popped in my head that I wouldn't have my Grandaddy forever, and I better make sure I make the most of every moment I had with him. Needless to say, I turned ol' Bonnie around and surprised the heck out of my Grandaddy. I cannot tell you how glad I am that I turned around. I wish I had done that a hundred more times.

I have one more precious memory of him that I want to share. A few months before I married my sweet hubby I noticed Grandaddy's wedding ring in Momma's jewelry box. His fingers had gotten so swollen he had to take it off, and my mother was keeping it with her jewelry so it wouldn't get lost. I don't know why I had this thought, but one night as Grandaddy sat in his recliner I sat down in front of him and asked him if it would be okay if I gave my fiance' the same ring that Mimmie had given him more than sixty years before. He had come to love and respect my sweet fiance' as a man that he trusted to take care of me. He agreed with tears in his eyes, and by the end of the conversation we were both crying. That is probably the most precious memory I have of my Grandaddy. Him sitting in his comfortable old recliner, tears rolling down his cheeks, and me, sitting at his feet, holding his hand, crying the same amount of tears that are now spilling over as I type this.

I know that after suffering the agony of lung cancer, heaven was that much sweeter for my Grandaddy. I am so very thankful that I will once again see both of my grandparents one day, but there are days, like today, that I cry for missing them so much. I wish they could have met my son and my nephew.

Had he met them, I'm convinced Grandaddy would have never given his scanner a moment's peace. 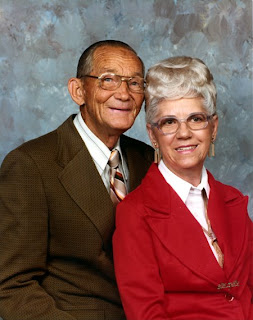 Written by Heathahlee at 3:17 PM

Tear jerker indeed... I miss and love them so much, also my dear sweet father.. Thanks for the memories.. Love ya cuz

You were right about needing a kleenex for this post!

That horrible afternoon you fell under the lawn mower I had to stay with him while everybody else went to the hospital with you. He held me in his lap and he cried and prayed and prayed for you.

You know, he THREW that machine off you. It ended up across the yard from where the accident happened.

Sister, I need another post to list all the crazy things he said! "I wonder what Sarah 'n the girls would say about that?"

You're going to make mom cry so much! :) I wish I could remember him more. I remember him smiling a lot, just watching me play on the front porch. And of course, clapping with one hand. But when they moved to Brado, it didn't seem like him anymore. I didn't visit him much before he died. He just wasn't my Granddaddy without that old house and the forest around him.

Your grandfather looks and sounds like a wonderful man. He's got a real twinkle in his eye in the picture with your grandmother. I read this story yesterday and it brought a tear to my eye. I'm sure you miss him very much. How wonderful to know that you will see him again someday. Praise God!

Thanks for sharing your memories, Heather. I remember the lawn mower day really well too. Carlyn was right...I remember thinking that Grandaddy must have turned into the Incredible Hulk to lift that riding mower off of your legs. And I remember those cowboy boots that saved your feet. You had me bawling reading this, but there were happy tears as much as sad ones. I can remember when that old store on the corner of the 4 way stop in Fisherville was an old country store with groceries and stuff...not the one where he hung out after Mimie died, but the one where Robert Perkins opened the construction office or whatever it was. Grandaddy would take me with him and I'd either get plain M&M's, Sugar Babies, or some soft peppermint sticks when we'd go in there. I remember going fishing with Mimie and Grandaddy and Aunt Minnie and Uncle Herman too at Uncle Troy's pond...and when the fish weren't biting, we'd sing "Get a bucket of chicken" into the end of our fishing poles...something Uncle Herman made up. I've taught that little trick to my boys...sometimes it works and sometimes not...