On my birthday in 1996, we decided to get a puppy. The local kennel owner that my husband had talked to invited us to come see her Shelties, or Shetland Sheepdogs. As soon as we got out of the car I knew I wanted one. We had to wait until one of her dogs got pregnant, but as soon as one did, Sandra, the owner, called us to let us know we'd have the pick of the litter. What a privilege.

When she called us to tell us the puppies were here we couldn't get down there fast enough to see them. Oh, how cute they were! Such wiggly, pitiful balls of cuteness! As the weeks went on, those pitiful little pups became adorable little fluff balls. We were having a hard time picking one out, but it was pretty much between the only male and the littlest female. My choice was the female, but Sound Man still wasn't sure. At that moment, he looked at Sandra and said, "We want her."

Then came the process of naming her. Sandra showed her dogs under the kennel name "Vogue," so any dog registered with the AKC from her kennel would start their name with "Vogue."

Vogue Gone With the Wind. Windi. 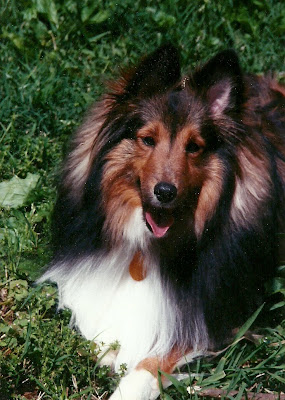 Even though she ended up being too small to show, she was the sweetest, prettiest, most likeable dog in the world. I wondered if I would ever stop thinking she was the prettiest thing on four legs. I never did.

She became our everything. We were trying to get pregnant and when month after month of negative tests kept coming, Windi was our baby girl. She slept on our bed every night and woke us up with sweet doggy kisses.

Even after Kiddo made his appearance she was still our baby girl. She tolerated this new little wiggly human, and never EVER tried to bite him or even growl...okay, maybe she did growl at him when he pulled her fur. But she never snapped at him, even when he was royally on her nerves. 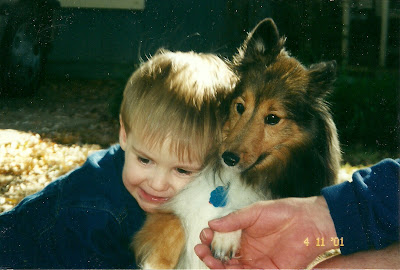 She stopped being able to jump on our bed a few of years ago, so she stopped sleeping at the foot of our bed about the time Jonathan started. She also started having trouble holding it to go out. Then she started losing her sight. And her hearing.

Even after all of this she was still in relatively good health. She would lie around most of the day, but every once in a while she would jump on Jonathan, wagging her tail as if to say, "I'm not too old to take you down, you young whippersnapper!" This told us she was still kicking. Until Sunday. Sunday morning, around 4:00 a.m, she woke me up breathing funny. I let her and Jonathan outside, where she made it to the grass, did her business, then collapsed. I couldn't get her to stand back up. I ran and got Sound Man to help me with her. He stayed with her the rest of the night, letting me go back to bed because I had to be at church early and he didn't. Her breathing was labored and she had had what he thought were seizures or strokes, yelping with each one. She never got better, and by that afternoon, we knew what we had to do.

He took her to the Emergency Animal Hospital that afternoon after Kiddo and I had said our tearful goodbyes. Kiddo rode with him...Sound Man said he felt like this was closure for him to do that. Kiddo didn't stay in the room while they administered the medicine, but was there until the very last moment when he had to leave.

We buried her in the back yard, right next to Shadow, who would have been gone a year just five days from the day Windi died.

What a year of loss since last May. I'm ready for my heart to quit aching. 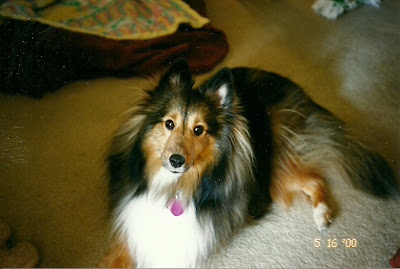 I love you, Windi girl.

I'm so sorry for your loss, Heather. I had a love/hate relationship with our first dog, but was home at the time with the kids and spent a lot of time with her. When she died, I was hysterical. I never expected that, but, like you, we had gotten her before kids and she was very much part of the family. I hope that over time you might let a new furry friend into your life and heart.

{wiping tears away, sniff} And I always thought she had the personality of Cleo on Clifford :)

Oh my heart aches for you. Each time I hear of someone losing a pet it takes me immediately back to the day we lost our Mags. Best cat in the world. We called him our dog because he came when we called him, slept at the foot of our bed and was such a sweet boy.

I am so sorry for your loss. I lost my little girl 2 years ago April. Not a day goes by that I don't grieve for her.

It never gets easier. If you remember, we lost our two big babies a few months apart last year. My heart broke. It still hurts and it's been almost a year since we said goodbye to Mandi. I have a little solace in the fact that we were able to rescue Buddy from the shelter who just happens to be the very best parts of Max and Mandi put together. He was sad and sickly in the shelter and I'm not sure he ever would have found a forever home. My hubby is convinced our pooches are in heaven waiting. I hope he's right.

My thoughts are with your family.

First? Thank you oh so very, very, very much for the sweetest email I have ever read. Second? Thank you for all of your kind words when you were grieving yourself. It has been a very rough month, hasn't it? I laugh... so many people were hollering at the end of 2010 "bring on 2011, I've had enough of 2010" and I knew... 2011 wasn't going to be any easier than 2010. ::sigh:: Thank God we have Him to rely on because if we didn't? Someone would have to lock me up and throw away the key... You are the best friend I have never met. :)

Oh, Heather. . . I'm so sorry. I'll never forget holding my Basset hound Freckles (my first baby, like your beautiful Windi!) while they administered the shot. I knew it had to be done, but OH how it hurt. My goodness, it hurts. I'm so very, very sorry for you to lose her.

May your heartache lessen with each day, sweet woman. God bless you.

I know it is hard to lose a pet. That is one thing that I have a tuff time with is grief. Some people tell me "well thats been years ago", but you know our hearts to not have a clock.
As you did in this post, try to remember what you had with her and that you gave her a wonderful home.
May your weekend be filled with peace, Melissa

I'm so sorry. I know how hard it is to lose a pet. My husband was the one who took our Buttons to the vet. It never gets easier. Maxie is getting up there in age and I get nervous whenever he doesn't feel well.

Oh Heather, I am so sorry. It's just hard to even be in your own house these days, isn't it? She was a beautiful girl.

Instead of mourning your loss, rejoice in the gift you were given and enjoyed for so many years, as I have done with my little Yorkies.

These words have always helped me through the sad times and onwards to a new puppy. I hope they help you a bit too.

An excerpt from the Last Will and Testament of Silverdene Emblem O'Neill, written in 1940.

"One last word of farewell, Dear Master and Mistress. Whenever you visit my grave, say to yourselves with regret but also with happiness in your hearts at the remembrance of my long happy life with you: "Here lies one who loved us and whom we loved." No matter how deep my sleep I shall hear you, and not all the power of death can keep my spirit from wagging a grateful tail."