31 Days of Worship - No Singing Required 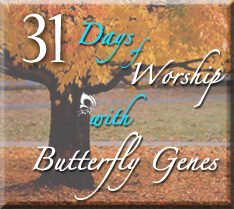 In our day and culture (at least within the modern church) most of the time when we say "worship," immediately we think of great songs. But do you have to sing whenever you worship? Well, let's look at the very first time the word "worship" (at least the English translation) is used in Scripture.

The first time worship is mentioned is when Abraham is obeying the Lord by taking Isaac up Mt. Moriah to sacrifice him (unbeknownst to Isaac). This is what Abraham says to his servants who were traveling with them:

He said to his servants,
“Stay here with the donkey while I and the boy go over there.
We will worship and then we will come back to you.”
Genesis 22:5
I'm sure Abraham wasn't thinking about singing "Chosen Generation" while he raised the knife, ready to sacrifice his son. But he was worshiping. He knew "that God could raise the dead..." (Hebrews 11:19) He said "We will worship...." He knew that somehow God would provide a way for both of them to worship on the top of that mountain.

Of course, he probably had something totally different in mind from singing a song. He may have sung something while up on that mountaintop, particularly when, just as he's raising the knife to end his only promised son's life, the ram caught in the bushes comes to the rescue. But it wouldn't have been the song that was his worship. It was the joy of serving the God of the universe and his act of obedience that was his worship. And, seeing as how he wasn't dead, I'm sure Isaac was worshiping pretty hard, too!
So, yes, worship can be singing (in my own life that is a key way I worship), but I think more often we worship by what we do in our everyday lives if we are being obedient to the Lord.

I'd love to hear how you express your worship!

I never noticed that Abraham used the word worship in that verse. Wow. Thanks for giving me some great stuff to chew on!!

I'm a singer, that's for sure. You're right: songs are not the only form that worship takes, although we tend to use "singing" and "worshiping" interchangeably, don't we? As one involved in worship planning for her church, this makes me want to really look at the ways we involve people in corporate worship!